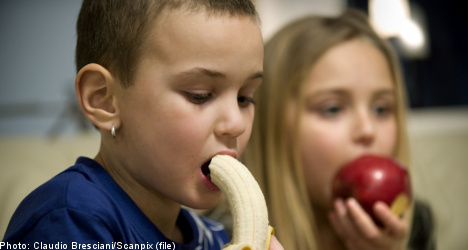 Previous studies had indicated that eating fruits and vegetables could reduce the risk of children developing allergies, but a study headed by Dr. Helen Rosenlund of Stockholm’s Karolinska Institute has discovered a surprising connection.

Fruits and vegetables are rich in antioxidants, which are believed to decrease airway inflammation. Recent studies reported that children who consumed more green vegetables had fewer cases of asthma, wheezing and hay fever.

However, in Rosenlund’s research, which was published online by the Journal of Allergy and Clinical Immunology last month, certain proteins in fruits and vegetables such as apples, pears and carrots are similar to the pollen parts that trigger hay fever.

As such, children can react to both, meaning that pre-existing allergies may have caused them to “eat around” the greens.

Rosenlund and her colleagues investigated the association between current fruit or vegetable intake and allergic disease in eight-year-old Swedish children to evaluate the potential effect of disease-related modification of consumption.

They examined the data of 2,447 subjects who had participated in a larger Swedish study since birth. Blood tests and questionnaires filled out by parents revealed that 7 percent of the children had asthma, while hay fever and skin rashes were more than twice as high.

Each child ate an average of one to two servings of fruit and two to three servings of vegetables on a daily basis, according to the study.

Initially, the vegetables appeared to help. The children who ate the most fruit were two-thirds as likely of developing hay fever than those who ate the least amounts of fruit. Apples, pears and carrots were particularly helpful, but there was no connection to vegetable consumption.

However, half the children with hay fever were sensitive to birch pollen, which resembles proteins in apples and carrots. After comparing the results without the children with food-related allergy symptoms, the researchers could find no link to hay fever.

Researchers suggest studies in other parts of the world may demonstrate a different variety of allergy triggers or allergens and urge them to look at how allergies influence the consumption of individuals.

One researcher has received lecture fees from MSD and is a consultant for AstraZeneca, but the other the authors have declared that they have no conflict of interest.