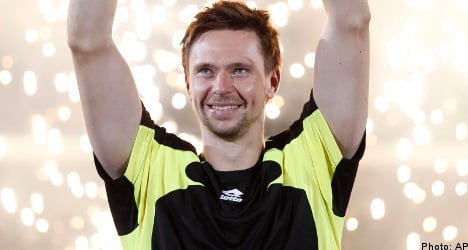 He joins retired compatriot Stefan Edberg as a two-time winner of the indoor trophy. Two-time Roland Garros finalist Söderling could barely contain his joy after making it two titles in three events so far in 2011 with a 13-1 record.

“I’m incredibly happy about my win,” said the world number four, “It’s obvious that I like Rotterdam a lot.”

Söderling, the top seed who beat Mikhail Youzhny a year ago for the title when the Russian retired injured in the second set, now stands 4-0 over Tsonga after losing his first set in the series.

The Swede, retaining a title for the first time in his career, now owns eight trophiess from 18 ATP finals. Söderling maintained his domination over Frenchmen as he won an eighth consecutive match against a player from France.

“I played well in the important moments. It was a tough match with Jo, like always, but I was able to play my best tennis and keep up my momentum,” said Söderling, who also claimed honours a month ago in Brisbane as he beat holder Andy Roddick in that final to move into the Australian Open on a high.

“It feels great. When you come to a place where you’ve played well, it brings up good feelings. It’s tough to defend the title, it adds some extra pressure, but I had only positive feelings this week,” he added, who has enjoyed fresh success since starting with Italian coach Claudio Pistolesi in December 2010.

“I had many tough matches and I saved a match point in the second round. I had to fight a lot in every match but I had the margins on my side. I’ve had a great start to the season,” said Söderling.

Tsonga, seeded eighth, was denied his sixth career title after winning his last in October 2009 in Tokyo, the venue for his last final. The defeat was only his second in a final after losing the 2008 Australian Open trophy match to Novak Djokovic.

However, the Frenchman was content with his week and said he now feels that his tennis – stalled in 2010 with various injuries – has been re-born.

“I played a good match, in fact, it was my best of the week. I got better with each match this week, I’m pleased with the state of my game,” he said.

“I played well, but Robin was too strong, especially at the end of the match. I’ll take confidence form this match into Maresille next week and then hopefully into the Davis Cup [first round against Austria in Vienna],” added Tsonga.

Söderling claimed victory in one hour 22 minutes, but was out-aced by Tsonga 20 to 12. The Swede claimed the opening set after losing an early break but getting it back in the eighth game.

Tsonga answered to level the match in the second set, carrying momentum from a 4-2 lead over Söderling. Söderling re-asserted his big game in the third, moving into position with a break for 5-3 and serving out his 13th win of the year from 14 matches.

He began the season by winning the Brisbane title and suffered his only loss in the Australian Open fourth round against Ukrainian Alexandr Dolgopolov. With the loss, the 18th-ranked Tsonga now stands 15-21 over his career against top ten players.

Söderling becomes the fourth player to win two Rotterdam titles, following the example of not only Edberg but American legend Arthur Ashe and Frenchman Nicolas Escude.