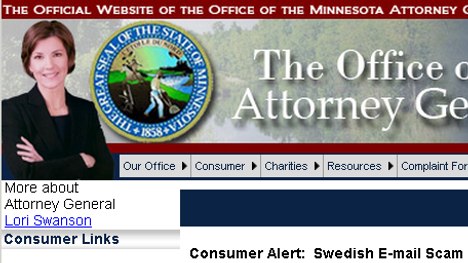 The emails, which are written in Swedish, claim to have been sent by Minnesota’s top legal officer, Attorney General Lori Swanson.

According to Swanson’s office, the fraudulent emails claim that the recipient has inherited “money or property from an unknown relative in Minnesota who has recently passed away”.

Considering that a great many of the more than one million Swedes who immigrated to the United States between the mid-1800s and early-1900s ended up in Minnesota, many Swedes could find it plausible that they have a long-lost relative in the state.

According to recent US census data, nearly 10 percent of Minnesota residents have Swedish roots.

Minnesota’s status as a primary destination for Swedish immigrants was also elevated to near mythical status in Sweden by a series of four novels written by Vilhelm Moberg in the 1950s collectively referred to as “The Emmigrants” (Utvandrarna), which chronicle the journey of a family from Småland in south central Sweden who settled in Minnesota.

The email scam urges recipients to contact a UK-based “lawyer” to collect the inheritance left to them by their fictional Swedish relatives.

“People in Sweden know there’s a large population here,” he told the newspaper.

“There are relatives that travel back and forth quite a bit.”

Swanson’s office urged anyone who has received the email to contact the Federal Bureau of Investigation (FBI).

Despite the warnings from Swanson’s office, police in Sweden told The Local they haven’t received any reports about the scam.

“There haven’t been any reported to us, but that doesn’t mean there aren’t any victims out there,” said Peter Ericsson from the internet crimes division of the Swedish National Bureau of Investigation (Rikskriminalpolisen).

Police authorities in Jönköping County in south central Sweden, an area from where many Swedes emigrated to the United States, also hadn’t heard from any victims of the scam in their region.

“Using lawyers in the UK is a common feature of these scams, but connecting them to Minnesota is something new,” spokesperson Linda Wangström told The Local.