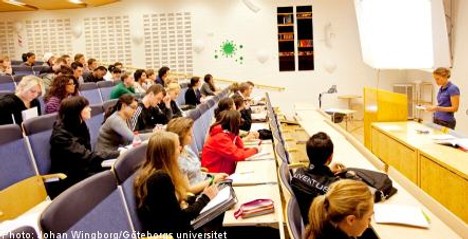 A file photo of a lecture at Gothenburg University

“It is serious in the sense that these are highly sought after classes. They have actually taken a place from someone else,” he told the newspaper.

The expulsions were part of a wider investigation into the growing number of faked qualifications that have been reported to the police over the past three years.

A pattern soon emerged and over 40 falsified documents were traced back to the same high school in Gothenburg, all of which had claimed they had attended the Åso Adult Gymnasium in Stockholm. On closer inspection it became clear that most of the students had never actually attended the school.

“The indications were, that the grades were falsified and we discovered that the school in question had not handed out the certifiactes. How they actually managed to get their papers is a matter for the police,” said Tuula Kuosmanen, manager for admissions at VHS, told

The rise in the number of cases of falsifying grades reported to the police over recent years seems to point to a growing problem. In 2010, 83 cases were reported, compared with 46 in 2009 and 19 the year before.

Britt-Marie Johansson, principal at Åsö High School, denied any involvement on the part of the school itself.

”We have no idea what this is about. There have been falsified documents arising from the school in the past, but never to this extent. Most of the students involved in this case have not been at the school.”