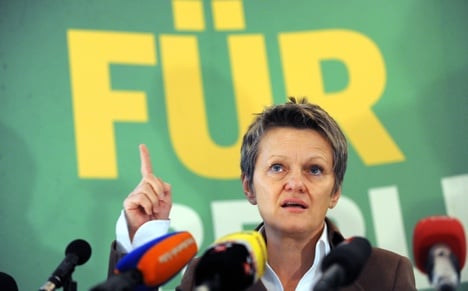 Speaking to the Bild am Sonntag newspaper, Künast described the inequality as “a permanent contravention of the non-discrimination precept in the constitution.”

“Our politicians have a duty to change that,” she added, saying that large German companies were still male-dominated worlds. This was not down to the fact that there are no capable women. “We need a quota,” said Künast.

“First we need a gender quota for the management boards. Then we need one for the executive committees,” she said. “Thirdly we need an equality law for private companies which, for example, fixes rules about family-friendly working times. Only then will women get opportunities for promotion in all industries and all levels of the hierarchy.”

Dieter Hundt, president of the Confederation of German Employers’ Associations (BDA), called on German companies to raise the number of women in managing positions.

Writing in the Bild am Sonntag, Hundt said, “When there’s a new appointment to be made because of the retirement of a board member, I expect companies to promote significantly more women to top positions.”

“When there are such new appointments in the large DAX companies in the next few years, more than 30 percent of women will be considered. You can already see that happening,” he continued.

Hundt expressed dissatisfaction with the current situation. “There are not enough women in German management positions,” he said. “That has to change, and that will change.”