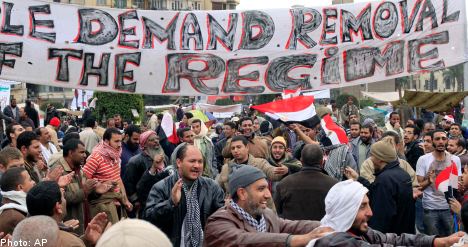 Anti-Mubarak demonstrators in Cairo on Saturday

Attacks on foreign news media in Cairo, including arrests and assaults, intensified this week as embattled Egyptian President Hosni Mubarak rejected protesters’ demands to stand down immediately after three decades in power.

Although no media organizations had yet recalled their staff, many reporters were being asked to stay in their hotel rooms.

“This of course is having huge consequences since they can not be on site themselves and see with their own eyes what is going on,” said the head of Sveriges Radio’s (SR) foreign service, Christina Gustafsson.

“Instead they have to watch TV images and stuff like that and from that try to report.”

A similar debate was taking place in neighboring Finland as most Finnish journalists in Egypt were reportedly trying leave the country. Among them were reporters from Finland’s Helsingin Sanomat newspaper and commercial broadcaster MTV3.

“The atmosphere has been constantly worsening and journalists have become targets,” John Palmen, a photographer with the Iltalehti daily told Finnish news agency STT.

“The situation started turning so that we were enemy number one. Also at the hotel they started quizzing us on what we were reporting on. We are leaving at the last minute,” he added.

Finnish public broadcaster YLE however said its reporters would remain in Egypt until Sunday.

Swedish public broadcast SVT said Friday that its reporter Bert Sundström was still in serious but stable condition after having been stabbed in Cairo a day earlier.

It is not yet known how the reporter, who also suffered a head injury, came to be attacked or how ended up at a hospital in the Egyptian capital, SVT said.