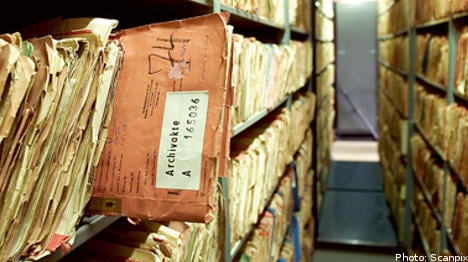 “It can not be ruled out that there can be former Stasi collaborators occupying important positions in society. There is an evident public interest in this information being made public,” said Sven-Olof Sällström of the Sweden Democrats to The Local on Friday.

Sällström cited information divulged by researcher Birgitta Almgren to the Världen Idag newspaper on Thursday awakened the party’s interest in the classified archive.

According to Almgren, the files contain the names of police officers, politicians and journalists.

“We are not interested in exposing people, someone who works as a plumber. We are interested in those who occupy positions which pose a potential danger for Sweden and Swedish society,” Sällström said.

“A journalist – a chief editor, for example – could be subject to pressure as this information will be available somewhere. We need to get the names out and clear the air,” he said.

Almgren, a researcher at Södertörn University, was in June 2010 given access to the Säpo files on the East German secret police after an extended court battle.

Access was ultimately granted on the condition that she preserves the confidentiality of the individuals named.

The archive forms part of the so-called Rosenholz Files – top secret Stasi documents containing names of foreign agents and details of their activities which ended up in CIA hands following the fall of the Berlin Wall in 1989.

Almgren, who is the author of a book about Swedish relations with East Germany’s communist dictatorship, will publish a report on her findings in the spring.

Sven-Olof Sällström has now demanded in a formal question to the justice minister Beatrice Ask that the information should be de-classified without delay and argued that he sees no reason why the Alliance government has any cause for concern.

“I can’t imagine that there are any centre-right politicians among those named, so I don’t understand why they are resisting the public release of the information,” he said.