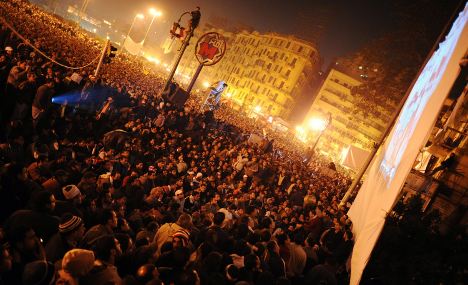 “It is good that President Mubarak wants to open the way for a new political start,” Westerwelle told broadcaster Bayerische Rundfunk.

But Mubarak must follow up with concrete actions and discussions across the country’s political spectrum, Westerwelle added.

Though participants in massive protests in Egypt have called for Mubarak’s speedy resignation after three decades in power, on Tuesday night the 82-year-old president told the nation in a television address that he would wait until after an autumn election.

Meanwhile demonstrators in the Arab world’s most populous country have said they won’t settle for anything less than an immediate exit.

US President Barack Obama also took a tough stance, saying that a peaceful transfer of power “must begin now.”

During Wednesday’s interview, Westerwelle said that both the European Union nations and the US have been following the uprising in Egypt closely and would insist on a peaceful, democratic solution.

“We do not want those who have taken to the streets to be violently suppressed,” he said, adding that as an important ally of the EU and a stabilising factor in the Middle East peace process, order must be protected.

“The (German) government is pressing for and hoping for a speedy transition to a new era of democracy and full civil rights in Egypt,” he said.

“It is not up to us outside to say what the timeframe should be and by which personalities and groups this path should be taken.

“We are just hoping very much that at the end of this path we actually see what millions of people on the streets of Cairo and Alexandria are clearly dreaming of, namely freedom and human rights.”

Several days of protests against Mubarak’s rule that have left some 300 people dead and more than 3,000 injured.

US
‘Health pass’: What documents do Americans need for travel to Italy?
Url copied to clipboard!