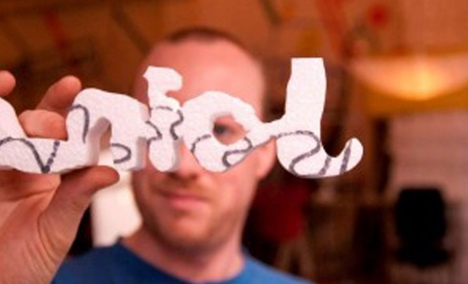 The British-born artist, entrepreneur and product designer is taking part in several events during the week-long festival, including workshops, panels and showcase of a project called “Open Design City.”

After relocating to Berlin two years ago, the self-described “thinker, doer, meddler and tinkerer,” co-founded the collective, which specialises in collaborative spaces that extend the Free Software and Open Source movements to the design world.

For the duration of the festival Open Design City will take up residence in the Open Zone foyer of the Haus der Kulturen. There guests can use their tools and equipment at their “Make Your Own Market” stalls, selling or exchanging their own products and services.

Can you give more detail on the Open Design City concept?

It’s about a physical transference of the open source philosophies and behaviours which were tested and prototyped by online communities, exploring how these working methods apply offline. Storytelling was the original open source act, it’s just human behaviour. We should reject ideas of intellectual property, and notions of property itself.

What are your plans for it at the transmediale?

It will be more social than physical or digital art. We have a 20-square-metre ‘base station’ in the ‘Open Zone’ at Haus der Kulturen der Welt, within which we have a certain number of tools and events already planned. We are encouraging others to engage with the larger space to create their own events or art or marketplaces…it’s really organic as to how the whole thing will evolve.

What do you hope people will take away from the exhibition?

We want people to come and free themselves from the structures…it’s not for me, or us, to say what will happen, merely just to create the provocation that you can engage in this way. I like the term catalyst – I’m not providing something that isn’t there, I’m just accelerating it.

Is this the first time you’ve been involved in the transmediale?

We also did something there last year and we were surprised they let us back- they already know what we’re like! Last year was a similar concept but on a more last-minute, short-term scale.

What memorable moments from last year will you be using to inform what you’re doing this time?

One of the highlights from last year was when someone came into the space, understood immediately what we were doing, and then starting doing a design survey of the people in the queue on their thoughts about the queue and what could be done next year about the queue. It was one of many great spontaneous actions. I seem to recall wrapping myself in plastic sheeting and asking people to draw on me for no apparent reason whatsoever, just as a means of spinning people into the space, to get them to engage and participate. I don’t know if was art, or what it was, but it was fun.

What part are you looking forward to most?

I’m particularly excited by our opening night event on Tuesday, which we’ve called “The Crowd.” We’re DJing collectively, although only one of us has ever DJed before. The event is based around the crowd creating the music and visuals that they’re dancing to. They will listen and respond, and we will listen and respond also, by picking up noises from the crowd and looping them back into the base music. So you’ll get an evolving piece of music that could either be cacophony or a huge success.

What does your involvement bring to the festival?

We go into a space and create an energy that makes people feel welcome, beyond viewing or consumption, something which is passive and inactive – I think we’re getting bored of that culturally, or at least I am.

You published an article on your blog entitled ‘What businesses can learn from terrorists,’ which outlined the benefits to businesses of operating in a highly motivated, organized network cell. Can you expand on this?

I’ve never met a terrorist, so I’m only able to speculate from how their behaviour is reported, but it seems like they have a shared goal with certain distributed technologies and behaviours and ways of working, and anyone can come into this system – there is no interview protocol.

Structures are merely concepts that we’ve attached expectations to, and we should be more willing to alter corporate structures to suit people’s needs. The post was about network autonomy, not an ideological standpoint. It was an organizational provocation, looking at the difference between a hierarchical system and a distribution system.

The post was targeted at corporate mindsets, about applying these methodologies towards having a greater autonomy within your business. If we were applying it in another way, to freelance culture, which is more prevalent here, if you have a shared goal or objective under which you’re operating, then by behaving in this manner, you can achieve the collective objective more quickly.