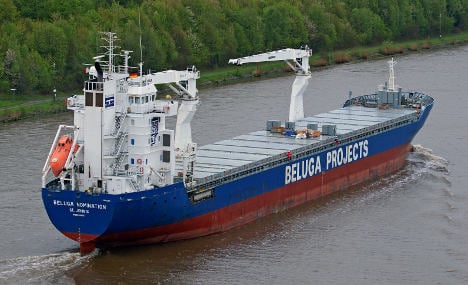 A file image of the Beluga Nomination. Photo: DPA

The head of Bremen-based Beluga shipping company blasted the effort as an “uncoordinated” rescue attempt and said the international community’s anti-piracy mission in the Indian Ocean had failed his crew.

Its cargo ship Beluga Nomination was boarded by Somali pirates January 24 around 390 miles north of the Seychelles.

The crew of 12 Polish, Filipino, Russian and Ukrainian sailors immediately locked themselves into a secure cabin on the Antigua and Barbuda-flagged ship.

Two anti-piracy patrol vessels from Denmark and the Seychelles shadowed the captured ship for the next couple of days.

Beluga’s director Niels Stolberg told the Frankfurter Allgemeine Zeitung that what happened next was “a disaster.”

The Seychelles ship suddenly opened fire, setting the Beluga Nomination’s engine room ablaze in a bid to disable it and prevent the pirates bringing it closer to the Somali coast.

In retaliation, “the pirates killed one of our men, probably in a rage,” he said. “The pirates obviously became extremely nervous and lost control.”

One of the pirates was also killed in the exchange, said an angry Stolberg, who blasted the role of both naval ships.

“The crew spent two and a half days locked in the secure room but nobody came to their aid. The international community has failed. An absolutely uncoordinated intervention like that is totally incomprehensible,” he said.

He did not provide details of the dead crew member, or his nationality, and said the condition of other crewmembers was unknown.

Two of those on board had managed to escape, he said.

“There was a big ruckus on board. Two of our colleagues used the confusion to escape. The second officer jumped into the free-fall lifeboat and catapulted himself into the sea. The second sailor dived into the water and managed to climb into the lifeboat. The two men were picked up by a Danish frigate.

Despite the rescue effort, the pirates still managed to bring the disabled ship to the Somali coast by using another pirated vessel, the York, to tow it.