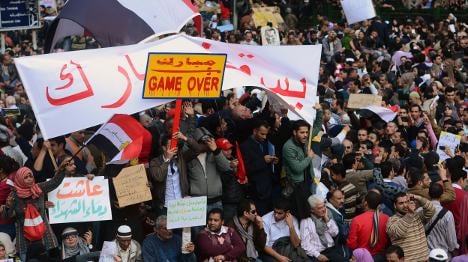 Foreign Minister Guido Westerwelle made the announcement in Berlin. The sharpened warning includes the tourist areas on the Red Sea, even though the violence has not yet spread to the popular resort towns such as Sharm el-Sheikh.

Egypt entered its eighth day of major protests Tuesday with a “march of millions” – nationwide demonstrations against the 29-year rule of President Hosni Mubarak.

Westerwelle said the advice was based on the fact that the political situation in Egypt was becoming increasingly murky, and because of the “march of millions,” which could cut off tourists areas.

Germany is not evacuating its nationals from Egypt, but the country’s flagship airline Lufthansa is running extra flights to bring home about 700 people a day from capital Cairo and the Mediterranean city of Alexandria.

The government has estimated there are about 30,000 Germans currently on holiday along the Red Sea coast. Tourism is the third-biggest earner for Egypt’s economy and the chaos is a major blow for areas such as the Sinai peninsula and Red Sea coast.

Westerwelle said Germany was not taking sides with any one political party in Egypt. Rather events were dependent on “democracy being given a chance.”

“We support free and fair elections and non-violence,” he said.