“It is of course extremely serious. It perhaps suggests that legislation in the future needs to be clearer,” Ingegärd Hilborn, the Swedish Schools Inspectorate (Skolinspektionen) general counsel, told TV4.

Despite the man having a prior conviction for having sex with a seven-year-old girl, he received permission to open three independent high schools in Stockholm in 2000, according to TV4.

Furthermore we was subsequently sentenced in 2007 to six years in prison for several more sexual crimes, including the aggravated rape of a child.

The Swedish government now wants to change the law so that the Schools Inspectorate can verify whether a person has previously committed a crime.

The agency’s lead counsel told Swedish television channel TV4 on Monday that it does not check up on whether a person has committed a crime when he or she applies to start a school.

When the man began his prison sentence and could no longer manage the schools, he placed them in the care of two individuals, one of who is a woman who had a prior conviction, and had served two years in prison, for pimping.

The firm remains in charge of the operation of three schools in the Stockholm area.

The Schools Inspectorate looks primarily at the principal’s financial suitability to start a school. It was not aware at the time that the three high schools were run by convicted criminals.

“There should be a law that ensures that those who are convicted of these kinds of crimes do not receive permission,” director-general Ann-Marie Begler said on Monday.

The agency currently does not have access to information in the crime registry and to ring around to all of Sweden’s courts to request verdicts is not practical, Begler argued.

“Then we would have several years of processing time. We need a better system that puts a stop to these kinds of possibilities,” she said.

“It is shocking and I am upset at the naïveté that we have in Sweden about this. When the agency receives an application, it should be able to ask for information from the crime registry. If one has a license and is sentenced, the court should notify the authorities,” he said.

A new law could come into effect within a year, Björklund forecast.

“Already when the [current] law was established, we should have thought about this. However, we could not have imagined then that this could happen,” he said. 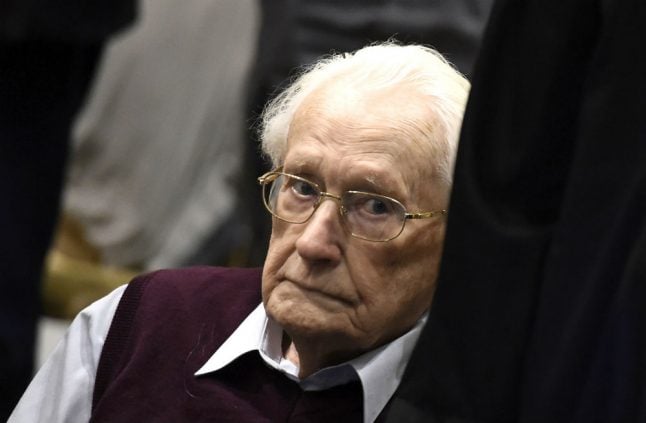 Oskar Gröning in a Lüneberg court in 2015. Photo: DPA.

In one of the last cases against a surviving Nazi, Oskar Gröning was found guilty in July 2015 of being an accessory to the murders of 300,000 people at the death camp.

He has been living at home despite the conviction as he mounted an appeal against his imprisonment.

After a court ruled last month that he was fit to serve his four-year prison sentence, his defence team has now turned to Germany's Constitutional Court, claiming that jailing Gröning at such an advanced age flouted his basic rights.

“In terms of constitutional law, it should be examined if the health condition of Mr Gröning allows for his basic right to life and physical integrity to be guaranteed” if he went to jail, his lawyer Hans Holtermann told the DPA news agency.

But the case before the Constitutional Court does not trigger a suspension of the sentence, meaning that Gröning could be served with the notice to go to jail at any time.

Gröning worked as an accountant at Auschwitz, sorting and counting the money taken from those killed or used as slave labour, and shipping it back to his Nazi superiors in Berlin.

He also on several occasions assigned to “ramp duty”, processing deportees as they arrived by rail in cattle cars.

During his trial, Gröning acknowledged “moral guilt” but said it was up to the court to rule on his legal culpability.

He had previously been cleared by German authorities after lengthy criminal probes dating back to the 1970s.

But a case was reopened against him after the legal basis for prosecuting former Nazis changed in 2011 with Germany's landmark conviction of John Demjanjuk.

Demjanjuk, a former death camp guard, was sentenced not for atrocities he was known to have committed, but on the basis that he worked at the Sobibor camp in occupied Poland and had thus been a cog in the Nazis' killing machine.

Demjanjuk died in 2012 before his appeal could be heard, but that verdict spurred new investigations against several elderly former Nazis.

Among a handful of convictions since is that of Reinhold Hanning, found guilty of complicity in the mass murders at Auschwitz.

He died aged 95 this year, before he could serve his jail term.

A case against former SS medic Hubert Zafke collapsed in September after the court found that the 96-year-old was unfit to stand trial.

More than one million European Jews were killed at Auschwitz before it was liberated by Soviet forces. Yet of the camp's 6,500 SS personnel who survived the war, fewer than 50 were ever convicted.