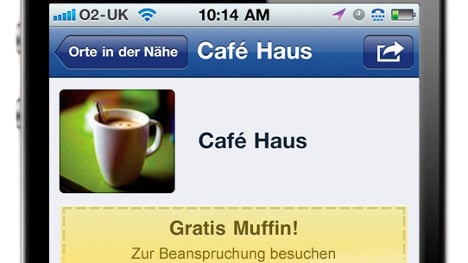 The function, offered under the German name Angebote, lets Facebook members get discounts and special deals by checking in with local businesses’ Facebook pages on their web-access smart phones.

“Deals” has been available in the United States since November. It is the social networking giant’s bid to tap into local advertising and promotions markets.

To start with, Facebook is partnering with seven companies, most of which operate across the country: Cinemaxx cinemas, the Vapiano restaurant chain, retailers Esprit, Benetton, Douglas and Gravis, as well as football club FC Bayern München.

For example, as an inducement to visit the cinema, a Facebook member might be eligible for free popcorn. To go to a Bayern FC game, they may be offered a free scarf.

Benetton will donate €2 to a technology centre in Kenya for every “deals” registration it receives.

Facebook is promoting the service to businesses as a marketing tool.

“You are giving the user a reason to make a stop at your business and buy something,” Facebook says in material for businesses published by the blog, facebookmarketing.de.

It could be used for either one-off discounts or as part of loyalty reward programmes. Group discounts are also possible if several friends check in to a business’ “deals” site.

Archibald Horlitz, head of the computer retailer Gravis, said Facebook “deals” gave the firm “the possibility to connect even more closely with our customers and suggest special deals to them.”

Of Facebook’s roughly 600 million users around the world, more than 200 million use it from mobile devices such as smart phones.

Facebook “deals” works through another relatively new function, “places,” through which the user lets friends on Facebook know where they are at a given moment. That means the user must state where they are on Facebook “places” in order to receive the discounts and offers on “deals.”

The service is only available on smart phones, either by downloading the applications for iPhones and Android smart phones, or via the Facebook website.