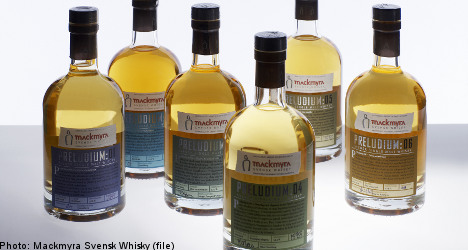 “Distillery construction is going really well and we expect production to get underway this year. The construction is already higher than the treetops,” Mackmyra founder and CEO Magnus Dandanell said in a statement on Sunday.

The company produced Sweden’s first malt whisky 13 years ago in Valbo about 10 kilometres southwest of Gävle in eastern Sweden.

The company was established in 1999 and now produces the equivalent of 600,000 flasks of whisky each year.

The first years were devoted to small batches and many experiments to find the perfect Swedish malt whisky. By 2001, the brand had perfected two recipes: one elegant and fruity, the other with a distinctively Swedish smokiness.

Both are sold in Systembolaget, as well as duty-free shops and selected overseas markets.

“With the new distillery in operation, we will more than triple our production capacity, which is needed to launch our products outside the Nordic countries,” said Dandanell

“In parallel, we have begun work on a project to finance the operation and construction of maturity stock volumes as needed.”

These take place at Fjäderholmarna off the coast of Nacka and Djurgården in Stockholm, Gävle, Gothenburg, Häckeberga Slott in Lund in southern Sweden, Karlstad in central Sweden, Högbo near Sandviken and Smögen in western Sweden, as well as the Valbo distillery.

In the coming years, the company will also offer its whiskys and whisky experiences outside the Nordic region.

“As part of our continued growth, we are also creating a dedicated role for Sweden’s first whiskey CFO,” said Dandarell.

The company had sales of about 100 million kronor ($15.44 million) last year and 45 employees, according to newspaper Dagens Industri on Monday.

The goal is to triple whiskey production and Dandarell hopes to raise several dozen million kronor from the offering, the report said.