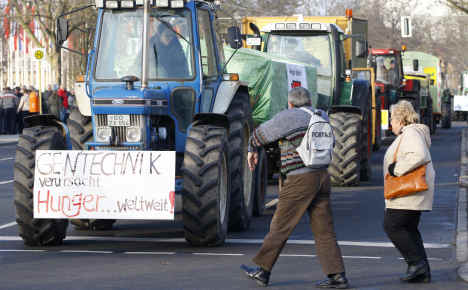 More than 120 groups representing farmers, animal rights activists and food businesses organised the demonstration, with a message for policymakers: “We’ve had it! No to genetic engineering, factory farms and export dumping.”

The protesters planned to march from Berlin’s main train station to the Brandenburg Gate, where a final rally and a concert were planned Saturday afternoon. Earlier, farmers demonstrated in front of the entrance to the annual International Green Week, or Grüne Woche , trade fair.

This year’s Green Week opened to the public on Friday. Organisers expected the event to draw some 400,000 people through January 30. More than 1,600 exhibitors from 57 countries are presenting products and services at Green Week 2011.

The event comes as the dioxin scandal in Germany has shaken consumer confidence in the safety and quality of the country’s foodstuffs. The discovery of animal feed tainted with the carcinogenic compound led some countries to block German pork and egg imports.

German Agriculture Minister Ilse Aigner toured Green Week on opening day, telling journalists at the event that it’s important to show that the dioxin-contaminated foods “are not the reality in Germany.”

Accompanying Aigner was Berlin Mayor Klaus Wowereit, who called for speedy implementation of the government’s 14-point plan to prevent similar disasters in the future, saying the goal should be to provide as much protection for consumers as possible.

Ending the officials’ tour of the event, the EU Commission’s Director-General for Health and Consumers, Paola Testori Coggi, said Aigner’s response to the dioxin discovery showed that the European Union’s system of controls was effective.