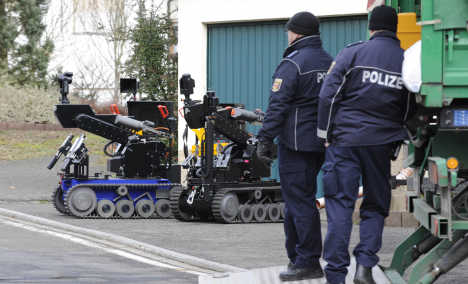 According to regional broadcaster SWR, 50 kilogrammes of nitroglycerine were discovered. The material will reportedly be detonated in a controlled explosion on Saturday.

A police spokesman told SWR that the explosive was sensitive to cold and that sub-zero temperatures were in the forecast for the region.

The material reportedly belonged to a 62-year-old pensioner from the nearby town of Hundsbach. The barn also contained machine guns, hand grenades, munitions and an old military vehicle.

Residents of Becherbach in the state of Rhineland-Palatinate had been told to leave their homes by 1 p.m. Saturday, a fire department spokesman told German news agency DAPD.

Due to the presence of explosives in the barn, eight nearby buildings were evacuated on Friday evening. Police said 30 people were affected. The barn in Becherbach was cordoned off, preventing anyone from coming within 200 metres of the building.

On Tuesday, police and criminal investigators confiscated another stockpile of weapons at the pensioner’s home in Hundsbach, according to SWR, including about 30 guns and up to 100,000 bullets.

Some of the weapons discovered have already been transported to a military training area in Baumholder by truck, where they will reportedly be stored in a bunker.