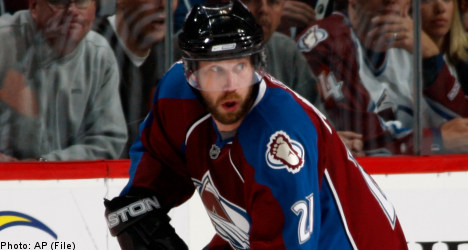 The Avalanche announced Friday that Forsberg, the 2003 NHL Most Valuable Player who last played in the league in the 2007-2008 season, would participate in the morning workout ahead of a game against Boston.

“I need to see where I am physically and practicing with NHL players is the best way to find that out,” Forsberg said.

Forsberg helped the Avalanche capture two Stanley Cup titles but has struggled in recent seasons because of a nagging right foot injury.

In January 2009, he made his return to the top Swedish league, the Elitserien, but only managed to appear in two matches with his home club, MoDo.

Forsberg returned for the 2009-2010 season, notching three goals in his first three games before taking yet another break from MoDo’s starting line up to consider his next move.

Ultimately, he returned to the ice and vowed to finish out the season together with another former NHL standout from Sweden, Marcus Naslund.

Forsberg finished the season with 11 goals and 19 assists in 23 matches, but grudgingly admitted following MoDo final game, that he had likely played his last match.

But earlier this week Forsberg asked Avalanche general manager Greg Sherman if he could practice with the club as a way of testing his foot and his fitness against NHL talent.

“Knowing our bond and the great history with Peter and the organization, we want to help him find out where he’s at,” said Avalanche vice president Jean Martineau.

Forsberg scored one goal in nine games in the 2007-2008 campaign for Colorado but was struggling with a groin injury.

With 24 wins in 47 matches, the Avalanche have 54 points and hold the eighth and final playoff position in the Western Conference, one point ahead of San Jose and Minnesota.

Henrik Lundqvist of the New York Rangers celebrates winning the Ticketmaster NHL Save Streak during the 2019 SAP NHL All-Star Skills contest on Friday in San Jose, California. Photo: Thearon W. Hender
The New York Rangers goalie knocked off Russian Olympian Andrei Vasilevskiy of the Tampa Bay Lightning, who held the lead through several rounds after stopping the first eight shots he faced.
The skill contests held on Friday night in San Jose, California also saw Edmonton Oilers speedster Connor McDavid win his third straight fastest skater title in a competition that included a female participant for the first time.
Canada's McDavid charged around the rink in just 13.37 seconds to eclipse Buffalo Sabres forward Jack Eichel, who finished in 13.58 seconds at the SAP Center arena.
Kendall Coyne, who plays on the American women's national team, was invited to take part and finished seventh out of eight skaters, beating out Arizona Coyotes forward Clayton Keller. Coyne cruised to a time of 14.34 seconds while Keller, who has 11 goals and 35 points with the Coyotes this season, finished in 14.52.
“I thought she was unbelievable,” McDavid said. “She was absolutely flying out there.”
Last year, Coyne's teammate Hilary Knight did the accuracy shooting drill, but her impressive time wasn't included in the official results.
Johnny Gaudreau defended his title in the puck control contest with a time of 27.045, and John Carlson, who captured a Stanley Cup with the Washington Capitals last season, won the hardest shot contest with a blast of 102.8 mph.
The NHL all-star game will take place on Sunday.
Url copied to clipboard!