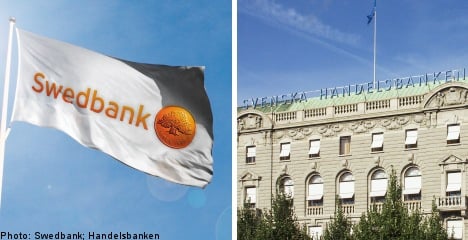 It has fined Swedbank 2.5 million kronor ($377,000) and Handelsbanken 3.5 million kronor, the Swedish Financial Supervisory Authority (Finansinspektionen, FI) said in a statement on Thursday.

The fines were issued for deficiencies in the controls, documentation, resources and division of duties for the depositary banking functions of the fund companies that hold and control bank assets.

In a statement, Swedbank said that it shared FI’s view that there have been shortcomings in its depositary bank functions and that it had implemented improvements in 2008, 2009 and 2010 in this area.

“Swedbank is positive to FI’s efforts to create lucid and uniform rules for financial market players and shares its view that there were shortcomings in Swedbank’s depositary bank function, which have since been corrected,” Thomas Backteman, head of corporate affairs, said in a statement on Thursday.

Swedbank has for several years conducted annual inspections of all its funds. Previously, in a certain year, a large number of funds were not inspected at all, according to FI.

In its decision, the agency claimed that Handelsbanken had not conducted sufficient and independent verification of the funds managed by its own management company for several years and found that it failed to maintain independence from the bank’s fund management companies.

The fund companies’ activities and transactions in each individual fund were not part of the investigation.

By 11.30pm, more than 2,000 Swedbank customers had reported the fault to the site Downdetector, and the problem was still not solved by 17.00pm on Friday.

“We have an ongoing IT disruption where certain customers see an incorrect balance on their accounts,” a message on the bank’s app read. “The reason is a planned update to our internal systems which went wrong. We apologise, of course, for that and are working as quickly as possible to fix the problem.”

The Swish payment service has also been affected, with the service, which is owned collectively by Swedish banks, reporting on its site that there was a “technical disruption at Swedbank and Sparbank which might affect Swish payments from these banks”.

haha nice prank @Swedbank can I have my money back now?

The disruption comes at the worst possible time for many Swedes. Many people are paid on the 25th of the month, meaning this Friday marks the start of the payday weekend. Many will have also scheduled their bill payments for this Friday.

“It’s just totally crazy,” he told SVT. “We were going to go out and shop for the weekend. It’s lovely weather and the kids want to go out, but we can’t use our card. We’ve got no cash. Everything is in the bank.”

“You’re just completely blocked. Colleagues need to make emergency food parcels for you. It’s just crazy that something like this should happen.”

In its statement, the bank assured customers that their money was “secure”, and that the bank still had the correct information on what their account balance should be.

“Customers who feel that they have suffered economic damage as a result of the disruption should contact the bank,” the message said.