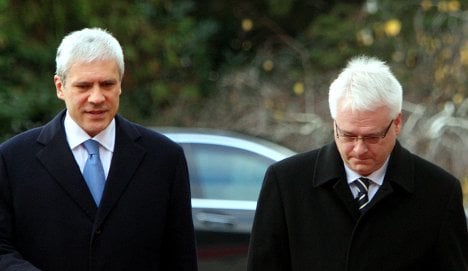 The letter contained a series of insults directed at the two leaders, who have made reconciliation with their Balkans neighbours a priority, the paper said quoting German sources close to the investigation.

The parcel with the grenade was found on Monday just two days before Josipovic was due to arrive on a three-day visit in Germany. The country has a large Croatian diaspora community and has always had good ties with Zagreb and was among the first countries to recognise its independence from Yugoslavia in 1991.

He said his visit to Germany would go ahead as planned. He is due to have talks with Chancellor Angela Merkel on Thursday.

“We know that our regional policy is an important factor of our European policy,” Josipovic said, stressing that “Croatia will not give up its European path.”

An Croatian embassy spokesman said on Monday that the letter, written in Croatian, had been handed over to German authorities and was received in a courier package sent from Germany.

The authors of the letter, that had an insignia and was signed with initials HF, also vowed to “avenge” a Croatian policeman, whose killing 20 years ago by rebel Serbs, was an incident that heralded the 1991-1995 war.

“Nothing can stop us,” from getting revenge the letter said.

Berlin police said Monday they had no leads yet on possible suspects or motives for the incident.

The European Union, that that all former Yugoslav republics aspire to eventually join, insists on reconciliation in the war-torn Balkans region. Ties between Croatia and Serbia gradually improved since the end of the 1991-1995 war. During the conflict Belgrade regime politically and militarily backed Serbs who opposed Croatia’s independence from the former Yugoslavia.

Relations between the former foes have notably improved since Josipovic took over in early 2010, as he, like Tadic, pledges regional reconciliation.

During the past year the two leaders have visited several massacre sites in Croatia and Bosnia and paid respect to the victims.