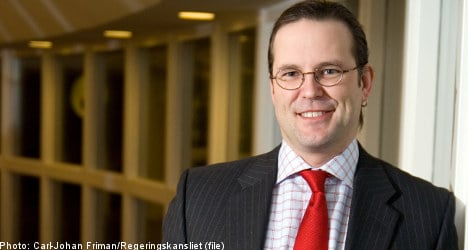 “The problems that Portugal, Greece, Ireland and Spain have are because they have not maintained sufficiently responsible and austere economic policies,” Borg said on Monday after a consultation with the committee on EU affairs of Sweden’s parliament, the Riksdag.

“The countries that have problems have them because they have not been strict enough with their policies,” he added.

However, according to Borg, Sweden has a responsibility to ensure the system works in Europe.

“Seeing that we have participated in the packages for Latvia, Iceland and Ireland, it has raised the bar for our participation in additional packages. There is a relatively low probability that we will do it,” he said.

When asked if the system is less responsible for a country like Spain than for Ireland, Borg replied, “One has to make an overall assessment. Our assessment is that the bar has been raised gradually.

Spain, which fears having to ask for help from the EU and the IMF to manage its finances, cancelled on Monday a planned Thursday auction of 10- and 15- year government bonds.

The auction will be replaced by a syndicated transaction, in which 10-year bonds for €4 billion (35.69 billion kronor, $5.31 billion) to €5 billion will be sold to a syndicate of banks.

The announcement came as an IMF delegation began a visit to Madrid on Monday. They will assemble material for a stability report to be published in the spring.

The euro fell the most against the dollar and European stock markets were generally down in Monday trading before the meeting between the finance ministers of the Eurogroup.

At the same time, interest rates climbed for the most financially pressured of the euro countries.

The interest rate on Spain’s 10-year government bond rose to 5.42 percent, compared with 3.04 percent for German government securities with the same maturity.