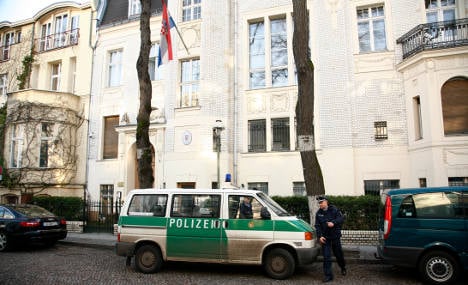 “Police units are at the scene,” the spokesman told news agency AFP. “It (the grenade) has been removed by technical experts from the Berlin police force and taken to a place where it will be blown up.”

The spokesman said that police had no leads yet on possible suspects or motives, but the incident came ahead of a three-day visit by Croatian President Ivo Josipovic from Wednesday.

“There were no threats as far as we know,” the spokesman said.

The scare also happened the same day as 13 suspects of a Greek radical anarchist group that has staged bomb attacks against state buildings and foreign embassies went on trial in Athens.

One of the more than a dozen packages allegedly sent in November by the Conspiracy of Fire Nuclei, as the Greek group is known, made it to the mailroom at the offices of German Chancellor Angela Merkel in Berlin.

Police in Berlin said on Monday that an embassy employee opened at around 1:00 pm (1200 GMT) a package that had been delivered there. After finding the object she called the police, who sealed off the area.

President Josipovic had been due to hold talks with Chancellor Angela Merkel on Thursday. On Wednesday he was due to meet the speaker of parliament, Norbert Lammert.

German Foreign Minister Guido Westerwelle said in a statement that he was relieved that nobody was injured and that he would discuss the incident with Croatian counterpart Gordan Jandrokovic by phone later on Monday.

“Germany will do everything to guarantee the protection and security of foreign missions.

“The upcoming visit of the Croatian president will continue to be prepared for with the utmost care,” the statement said.