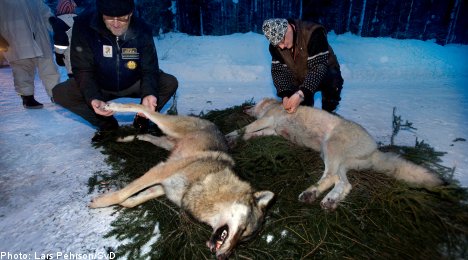 “I regret that Sweden has embarked on the licensed hunting of wolves without providing a clear answer to my letter sent on December 7th,” Potocnik, who is responsible for the protection of endangered species, wrote in a statement on Monday.

He emphasised that the commission has called for an intensive dialogue with the Swedish government about the fact that, as the commission sees it, the hunt may be illegal in relation to EU law.

Now, he pointed out, there is nothing else to do but to take Sweden to court.

“The Swedish authorities’ actions give me few other options than to propose to the EU Commission to start a formal proceeding against Sweden for breaching the EU’s environmental laws,” said Potocnik.

With the wolf hunt in its third day on Monday, there are only five wolves left in this year’s quota of 20: three in Värmland in western Sweden and one each in Örebro and Västmanland in central Sweden.

Over the first two days of the hunt, 14 wolves were killed by Monday. Among the wolves that have been killed, four were alpha animals, two of them marked.

Eleven were classified as adults and only three pups or juveniles. This does not correspond to the entire age composition of the wolf population.

“It sounds like a skewed distribution. It may be that the adult animals expose themselves more, but also that the hunt was consciously directed towards them,” said Olof Liberg, coordinator of the Scandinavian wolf research project Skandulv.

“If the hunters shoot young animals, the adults are understandably left behind and can continue to reproduce. And then the hunters cannot let their dogs loose in the countryside,” he added.

Even last year, there were clear signs that the shooting was lopsided. However, Liberg pointed out that the researchers took that into account that for this year’s allocations.

“In order to spare the number of alpha animals and secure at least 20 rejuvenations next year, we slowed the allotment overall,” he said.

A shot was fired at a wolf in Västra Götaland this weekend, but after tracking, it was determined that the wolf was not hurt. The hunt will likely resume there.