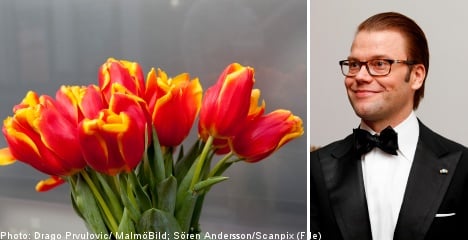 Spring may not yet be in the air but the Swedish love affair with tulips proved again to be never ending when the new “Prince Daniel” tulip was unveiled during a naming ceremony last week.

Swedes are the biggest buyers per capita of tulips in the world, with some 130 million sold every year. Given the new prince’s popularity and the type of flower, the new tulip looks sure to be a success.

“Those which sell best are simple tulips” Håkan Alverbäck, manager for Alverbäcks blommor, which sells over 19 million tulips each year, told DN.

There are around 6,000 types of tulip, some 223 of which are grown each year in Sweden.

The “Prince Daniel” a red and cream cross between ”Liverpool” and ”Strong Gold” will not reach the shops until next year, so those looking for a royal infusion will have to make do in the meantime with Princess Victoria, which has been available since 1979.

Don’t waste your time looking for a “King Carl XVI Gustaf” though. Apparently the reigning monarch, unlike the rest of the population apparently, has made it clear that he isn’t a tulip fan.