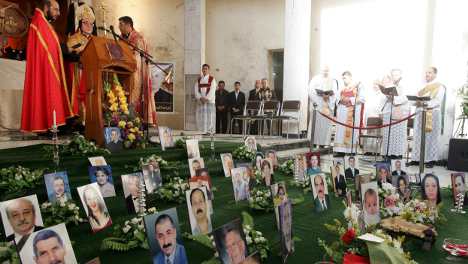 Christmas in Iraq, under shadow of persecution. Photo: DPA

Körting wrote in a letter that only 2,500 Iraqis had been granted asylum in Germany, and that this was not enough. Most of the Iraqi refugees here were Christians who had fled the chaos and persecution in their homeland.

“If Syria and Jordan are each in the position to take a million refugees or more, then we should increase our willingness to accept religious minorities from Iraq from 2,500 to 25,000,” Körting said Der Spiegel magazine reported on Saturday.

Der Spiegel reported that the German Foreign Ministry’s latest report on the situation says that the mass flight from Iraq would likely continue and would be very difficult to stop.

The Iraqi state authorities were powerless to stop or prevent the acts of violence being perpetrated against Christians, the report says, according to Der Spiegel.

German Catholics have organised their own initiative to try to help Christians facing persecution, while Trier bishop Stephan Ackermann is due to travel to Jerusalem this week to investigate the situation for Christians in Israel and the Palestinian regions.

Violence against Christians has received increased attention since New Year’s Eve when 21 Coptic Christians were killed in an attack on a church in Alexandria, Egypt.

Volker Kauder, head of the Christian Democrats’ parliamentary bloc, has become increasingly engaged on the subject, according to a report in the Frankfurter Allgemeine Zeitung.

He travelled to Egypt shortly after the attack on the Coptic Christians, and said the CDU would, “again become the lawyer for persecuted Christians.”