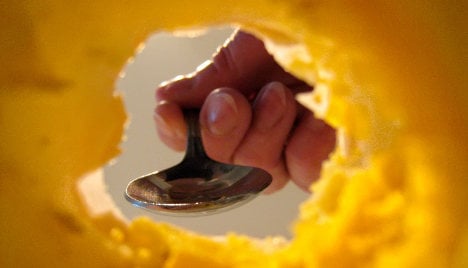 What's in your egg? Photo: DPA

chemical compound, in poultry and meat.

The European Commission said South Korea had become the first country to suspend imports of German pork, and accused Seoul of overreacting.

“It is a decision which is out of proportion as to what is going on in Germany, but we are going to try to talk with the South Koreans to reassure them,” said Frederic Vincent, spokesman for European health commissioner John Dalli.

Brussels does not consider there are grounds for declaring a ban on exports of German meat or other products from Germany “because the farms have been closed and farm products which have been delivered are blocked, awaiting analysis,” Vincent said.

Slovakia became the first EU country to impose restrictions on German meat, after it suspended sales of poultry meat and eggs while it conducted tests to assess dioxin levels.

“The Agriculture Ministry has ordered checks in shops and warehouses in response to the discovery of dioxins in certain foods,” Slovakia said in a statement. “Pending the results of laboratory tests, the sale of eggs and poultry imported from Germany will be temporarily suspended.”

Russia’s agriculture watchdog said it had stepped up controls on food of animal origin from Germany and also from other EU countries although it did not specify which ones fell under the tougher regime.

The watchdog also warned that Russia could ban meat imports if it did not receive official information on the situation.

“The European Union still lacks a system to react urgently to cases that could be dangerous for animals and humans,” the watchdog’s spokesman Alexei Alexeyenko told the Interfax news agency.

The British Food Standards Agency said on Friday that cakes and quiches from two manufacturers which use liquefied eggs from Germany would be removed from shops, although due to the short shelf-lives of the products, most would already have been eaten.

German news magazine Focus reported on Saturday that increased dioxin levels had been recorded in animals, according to a report sent by the government to European authorities on Thursday.

This shows that meat probes taken from three laying hens contained 4.99 pictograms of dioxin per gram of meat – way over the top permitted level of two pictograms per gram. A public warning to stay away from such meat would not be made, as no immediate health risk could be expected, the federal Consumer Protection Ministry said in the report.

The assets of feed producer Harles & Jenzsch have been frozen, according to Focus, in anticipation of compensation claims, while nearly 5,000 farms across Lower Saxony and eight other states have been closed.

New accusations against Harles & Jenzsch are also being made by the Lower Saxony Agriculture Ministry, the local paper Westfalen Blatt reported on Saturday. It said that the firm could not only face charges of breaking food and feed rules, but also fraud and tax evasion.

A ministry spokesman told the paper that there was much to indicate that the firm had conned its customers and sold industrial fatty acids as feed fats – worth twice as much.

The scandal has continued to spread across Germany since it emerged that about 3,000 tonnes of industrial fatty acids contaminated with the highly toxic substance dioxin were used to enrich feed for egg-laying hens, poultry and pigs.

As only a small quantity of oil is generally added to animal feed, the original 3,000 tonnes may have been mixed into tens of thousands of tonnes of feed.