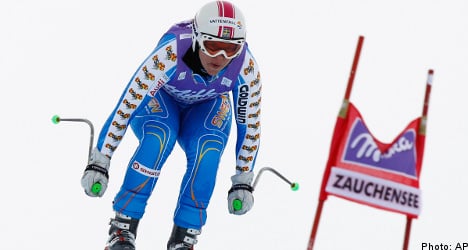 The win was the 37th World Cup success for the 26-year-old Olympic champion. She defeated Pärson by 0.43 of a second, while Austrian Anna Fenninger grabbed her first-ever podium finish in the discipline 0.98 of a second back.

It was Pärson’s first podium finish of the season. Vonn said that she had won despite a narrow escape from crashing out.

“I made a small mistake which was perhaps because of the snow, it was very wet and all of a sudden I was almost in the netting. At that point, I said to myself that if I got through the next few corners I am going to maintain my speed to the finish,” said Vonn.

“I did not think that it was finished at that moment, I thought if I was quick over the rest of the course, there was still a chance of winning,” she added.

World Cup leader Maria Riesch of Germany retained her place atop the overall standings by finishing fourth, but Vonn was delighted she had made inroads into her lead.

“It is a very important result in terms of the overall standings. I can claw back points during the weekends that involve the speed-orientated races,” said the American, who unlike Riesch, is not a top-class slalom performer.

“I must do that. There are several speed events, and I must give everything in them. We will see what my form is like at the world championships [in Garmisch, Germany, in February] and then I will give my all till the end of the season,” she added.