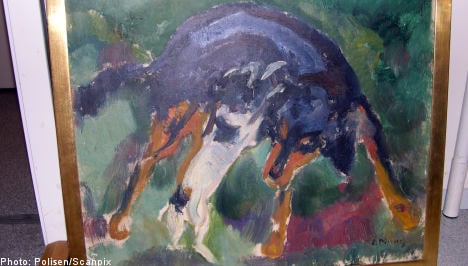 The Malmö Art Museum didn’t even realise the paintings were missing until policee police recovered them in am early October raid on a flat in Landskrona in southern Sweden.

Edvard Munch’s “Two Friends”, valued at around ten million kronor ($1.4 million), was the most noteable of the works stolen in the raid.

It was found along with two other paintings, one by Gustaf Rydberg and one by Pär Siegård when police entered a flat in connection with an investigation into credit card fraud in the taxi sector.

In his defense, the 52-year-old claims that he believed that the paintings were discarded and that he found them among the debris on a wharf next to the museum.

The explanation, however, was not accepted by Malmö district court, which argued that in that case the defendant should have taken steps to check that the paintings had been abandoned.

But the court accepted that the 52-year-old did not know how much the paintings were worth, a mitigating factor which, coupled with the fact that 52-year-old has now come to grips with his amphetamine use, meant that he avoided imprisonment.

The trio were also ordered to pay 33,000 kronor in damages to the municipality of Malmö.

The Malmö Art Museum has since the theft introduced a raft of measures to prevent a repeat incident.

“I don’t want to go into the details of what we have done, but among the more obvious is that we have installed bars which fall when we out together exhibitions. Previously we closed off with ropes,” said museum head Göran Christenson.

Christenson believes that the unfortunate episode has an upside.

“This was a terrible event and I would obviously have preferred that it had never happened, but it has brought something positive with it, it is that the attention has meant that we have received funds to address certain issues.”

The Munch painting “Two friends” portrays two dogs and is thought to originate from 1913 when the Norwegian painter was living in Germany and is Malmö Museum’s only work by the artist.

Munch’s perhaps most famous work is the anxiety-ridden “The Scream” and his works have been sold for around 200 million kronor.