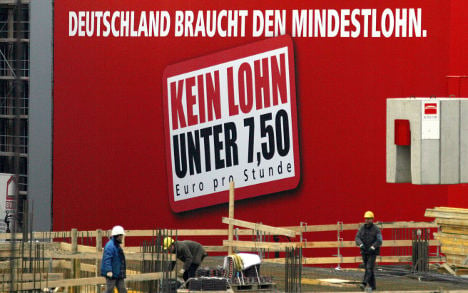 From May 1, Germany has to open up its labour market to the citizens of eight European Union member countries. Fearing that a flood of workers from eastern Europe, where wages are lower, will push down earnings in Germany, unions and socialist The Left party are demanding a minimum wage to guard German workers.

The Left party parliamentary leader Gregor Gysi warned that without a minimum wage, Germany could see outbreaks of racism and xenophobia as workers and the unemployed saw jobs flowing to lower-paid eastern Europeans.

“I don’t want to see caravans in which nothing but Romanians or Polish are housed who work here under grubby conditions and wages of which we have to be ashamed,” he said.

At the same time, jobs for Germans would be lost, he said.

“Then we have xenophobia and racism, which won’t be helpful at all,” he said.

All parties therefore should take responsibility and work together towards a minimum wage.

Michael Sommer, the leader of the Confederation of German Trade Unions (DGB) meanwhile stepped up pressure, threatening that workers would begin a major campaign unless the government acted.

“That will lead to an immense downward pressure on wages in Germany,” the DGB boss said of the scrapping of present restrictions on EU workers moving to Germany.

If the government did not tackle this issue, “we will increase the pressure in the new year and accompany legislative procedures on temporary work with campaigns,” Sommer said.

“Either the government acts or we will act,” Sommer said. “We have to have a legal regulation before May 1, 2011, at least for casual work.”

While there are some minimum wages in specific sectors, no national minimum exists. The unions are particularly worried about low-paid casual jobs.

There was a “unique blockade situation in federal government,” Sommer said. The pro-business Free Democrats (FDP) supported equal pay for equal work, and the conservative Christian Democrats and Christian Social Union were receptive to a minimum wage in industry, yet each party rejected the other’s position, Sommer said.

Frank Bsirske, head of the services union Verdi, has likewise vowed action in the event that the government has not pressed ahead with stronger minimum wages by May.

“I assume that we, along with employers and their associations, with employees and workers’ councils, will make it clear how important legal regulations are if the FDP sticks to its resistance.”

Employers were prepared to pay fair wages, he said. They were threatened by “wage dumping” in which firms slash wages and prices to undercut competition.