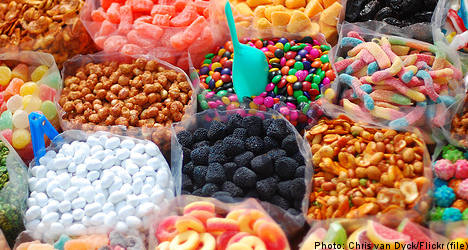 Skat, the Danish tax authority, revealed that every other kiosk that it has inspected sells smuggled candy from Sweden.

The reason behind the appetite for illegal Swedish candy stems from a high sugar duty amounting to 17.75 Danish kroner ($3.15) per kilogramme, resulting in brisk illegal cross-border trade.

According to the report, illegal candy sales cost the Danish industry millions of kroner because it cannot compete on price. At the same time, they also cheat the state out of millions in taxes and duties.

Klamer added that the number of individuals and businesses simply crossing the Öresund between Copenhagen and Malmö to shop without paying taxes and surcharges has soared.

He acknowledged that the tax agency has made progress in stamping out smuggled beer and soft drink sales, but the Danish Chamber of Commerce singled out the job and business losses as a result of the illegal trade.

The chamber estimated that 15 percent of all candy trade in Denmark is illegal, the report said.

DENMARK
How Denmark got its children back to school so soon after lockdown
Url copied to clipboard!