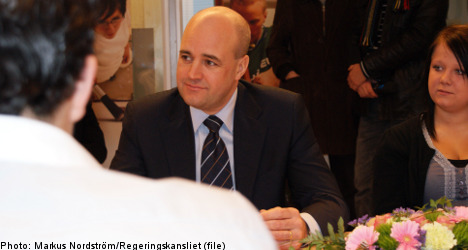 The level of confidence in the prime minister is at its highest since the survey was launched by the newspaper in 1995.

Reinfeldt himself held the previous record at 63 percent a year ago.

While confidence may be riding high in the prime minister, the Centre Party, an Alliance coalition partner, fell further in the polls, dropping to below the 4 percent threshold for parliamentary seats.

The Christian Democrats continued their poor run with under 3 percent of voter support according to the Skop poll.

“Nothing to celebrate exactly,” said Centre Party press secretary Michael Arthursson regarding the fortunes of the two government parties.

The Centre Party, which polled 3.8 percent, has lost almost 3 percentage points since the parliamentary elections in September. The Christian Democrats have lost as much, coming in at 2.8 percent.

The Moderates continued to dominate among the Alliance parties in the poll with 35 percent, a climb of more than 4 percent since the election.

He explained part of his own party’s fall in that not much has happened politically during the autumn. And that the focus has been on the Moderates in connection with the formation of the government.

“We have to find out what people expect of the Centre Party, what they want us to do within the Alliance,” Arthursson said.

The Social Democrats remained at a record low level of support, with only 28 percent of voters backing them.

Among the opposition parties, the Green Party has the most to cheer with a climb to 11 percent, almost four percentage points above their election result.

The Sweden Democrats polled 6.3 percent, up 0.6 points on their election result, while the Left Party dropped by the same margin to 5.0 percent.

Skop interviewed 1,100 people aged 18 to 84 between November 28th and December 16th and asked the question, “Which national political party do you like best?”