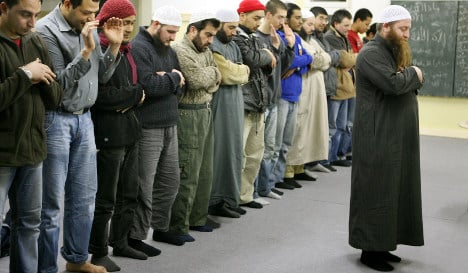 The period between Christmas and New Year is often used by Islamists to attract new followers who fill their time during breaks from work or school by attending sermons and lectures, daily Süddeutsche Zeitung reported on Monday.

During the holidays, Islamists hold seminars and other events to “indoctrinate particularly young people with Salafist preachers,” an intelligence source from the North Rhine-Westphalia Office for the Protection of the Constitution told the paper.

“That is not a new development,” the source said.

Such seminars were particularly troubling “because they have the space and time to offer group education and exert extremist influence through often charismatic lecturers.”

Of particular concern are preachers from the Salafi community which supports a fundamentalist stream of Islam that aims to create a society modelled on the purported original community of the Prophet Mohammed.

The star of this scene is a former boxer called Pierre Vogel – also known as Abu Hamza – who pushes a strict interpretation of Islam but publicly condemns violence and terrorism.

A group connected to him, called “Invitation to Paradise” was raided by the police the week before last. On orders from Interior Minister Thomas de Maizière, officers searched the group’s headquarters and also the homes of leading members for material that could provide a basis on which to ban the organisation.

Vogel, a regular preacher at the Al-Nur mosque in the Berlin district of Neukölln, has cancelled several recent events.

In the town of Elsdorf west of Cologne in North Rhine-Westphalia, a three-day “Islam education meeting” was held between Friday and Sunday. Authorities kept a close eye on it because the teachers at the seminars are considered radical preachers by intelligence agencies that monitor extremism.

The meeting included such preachers Hassan Dabbagh from Leipzig and Mohamed Benhsaid from Bonn, both of whom authorities consider radical.

Two of the preachers recently faced a complaint – ultimately unsuccessful – by Munich prosecutors that their sermons had criminal associations.