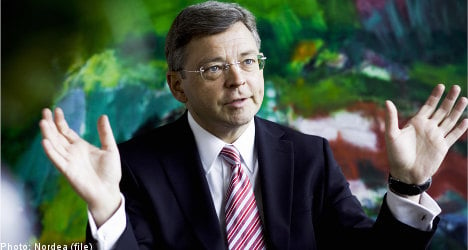 The euro faced its toughest challenges yet in 2010 with debt-ridden members Greece and Ireland forcing other euro and EU countries to come to the rescue with a massive loan package, newspaper Svenska Dagbladet reported on Monday.

“It is maybe more important for large countries like England to take a position and join so that it becomes a more stable area. It is not good with an unstable currency area,” Ericsson Chairman Michael Treschow told the newspaper on Monday.

Treschow underlined however that in the longer term he still believed that Sweden would gain from having a currency that followed “more stable” rules.

As the 16-member currency prepares to welcome its newest member, Estonia, on January 1st, the debt crisis in the eurozone this year has deterred many who were previously positive to Sweden joining the euro.

Many economists believe that the crisis has proved that monetary union is not optimal and predict that poor countries may be forced to leave, the report said.

At the same time, the Swedish economy has rocketed past eurozone growth rates. While Finance Minister Anders Borg has insisted that Sweden would have done well even with the euro as currency, he has not been as proactive as Liberal Party leader Jan Björklund in pushing for a new euro referendum, SvD reported.

Sweden voted against 56.1 percent a 2003 referendum that would have determined accession on January 1st, 2006.

Swedish business leaders do not have a Swedish euro accession on their minds at the moment, with Nordea CEO Christian Clausen stating that Swedish support does not seem to be of immediate importance.

“A new referendum would probably result in a very clear answer from the people,” Clausen, a native of Denmark, told SvD.

He added that there is no clear answer as to whether Sweden would be better off in joining the eurozone.

“If one joins the eurozone, there might be a little more leeway – for example, having a slightly larger deficit. However, the problem is that some countries gave themselves too much space,” cautioned Clausen.

“The crises this year show that one must have a tight fiscal policy given that one does not have the interest rate weapon the same way countries outside the euro do. Sweden has shown that it has fared very well on its own merits on the outside,” she said earlier this year.

However, Swedish business leaders remain confident that the euro will survive in the long term.

“Some countries may possibly be forced to leave, but on the whole, it will stay together. I am European and I believe in the project. We live in an open democracy and it takes a bit longer to implement things,” Atlas Copco CEO Ronnie Leten, a native of Belgium, told SvD.

“The euro and the dollar are the world’s two reserve currencies and there is no doubt that the euro will survive. The question is how long it will take to solve these acute problems,” added Clausen.