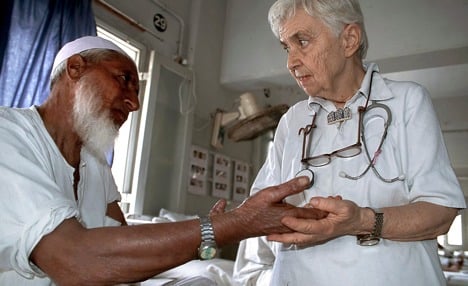 Every morning Ruth Pfau stands short and frail before a tall crucifix in Karachi’s St Patrick’s Cathedral. She bows her head, shuts her eyes, places her right hand on her heart and prays.

It is the beginning of another long day for the 81-year-old nun known locally as Pakistan’s Mother Teresa, who has spent half a century caring for some of the country’s poorest and most ostracised people.

Pakistan is one of the most dangerous countries in the world, where Washington says Al-Qaeda is based. Its northwest mountains border Afghanistan and are subject to US drone strikes and Pakistani military operations.

Bombings have killed 4,000 people in three years, kidnappings are common, Islamist groups violently opposed to all but their extremist interpretation of Islam control significant territory.

Sister Pfau, who needs a stick to walk, admits some disquiet over security, but says nothing would stop her serving people in distress. “I find no difficulties even in the northwestern tribal areas, where most people know me because of my work and never create any hurdle when I go there to serve them,” she said, adjusting her white scarf on her silver-hair.

It was after the horrors of World War II in her native Germany that she decided to dedicate her life to serving humanity, become a doctor and join the Daughters of the Heart of Mary order, founded during the French Revolution.

Not required to take the veil or live in seclusion, she ended up in Pakistan by chance. En route to work in India, visa complications forced her to break the journey in Karachi, where she visited a lepers’ colony.

That was 1960 and the rest is history. The sub-human misery of what she saw persuaded her to stay in Pakistan to help the cause of leprosy. The living conditions were appalling. The gutters were overflowing and sewer rats feasted on limbs of patients unable to feel the rat bites.

“I felt saddened when I saw people living in caves, crawling like animals. They had compromised with their fate, but it was not their fate, they deserved a much better and happier life,” she said.

Sister Pfau’s makeshift clinic soon became a two-storey hospital, then the Marie Adelaide Leprosy Centre with branches across Pakistan. She trained doctors and treated thousands of victims. Her dedication inspired an otherwise hesitant government to establish in 1968 a national programme to bring leprosy under control.

Half a century ago, there were leper colonies across the country but now the programme puts the incidence of the disease at 0.27 people out of 10,000, meeting benchmarks from the World Health Organisation.

At times of natural disaster Sister Pfau was there: Drought in Baluchistan in the southwest in 2000, the 2005 earthquake in Kashmir and this year’s floods, the country’s worst natural disaster that affected 21 million people.

In Sindh, where more than a million people were affected by the floods, she targets areas mainly populated by Hindus, one of Pakistan’s clutch of religious minorities largely neglected by the government and Islamic charities.

She is a frequent visitor to flood-affected areas, largely bone-crunching drives from Karachi, which seem to tire her team more than her. “She still has amazing stamina. She is an amazing person,” said Venu Gopal, coordinator of Sister Pfau’s charity.

Born in Leipzig, she was just 17 years old when she headed for the border to cross from East into West Germany, braving Soviet soldiers who were ordered to shoot on sight.

She walked two days and nights before she was spotted by a Russian and a German soldier. “The German soldier told the Russian he would deposit me at the detention camp and walked with me a few paces ahead. Then, pointing in one direction, he whispered: ‘There lies the West’.”

Now, in places like the remote village of Begna in flood-hit Sindh’s Thatta district, people look upon the elderly German nun as a mother. “We’ve lost everything, but Amma (mother) is helping us and we hope to be on our feet soon,” said snake-charmer Sanwal Jogi.

“Thanks to her, I managed to replant some oilseeds and mustard, nobody else apart from her and her team comes down here,” said farmer Kaser Hero.

She has provided them with shelter, helped them rebuild their houses, gives them seeds and money to help them cultivate the land again.

“It is not just leprosy. We’re doing our share in healing partial blindness and tuberculosis and helping people stricken by disasters. Dr. Pfau commands respect in the West and gets funds for all this,” Gopal said.

“One should not compare one great legend with another, but we rightly call her Mother Teresa as she is serving people with the same empathy, dedication and love as Mother Teresa did in India,” said Sindh health minister Saghir Ahmed.