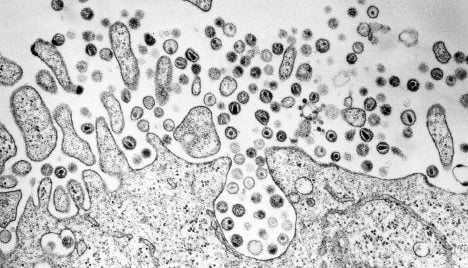 Researchers at Hannover Medical School and Ulm University have demonstrated that a peptide – similar to a protein but shorter – called VIR-576 stops the human immunodeficiency virus “docking” with a human cell.

“It is a completely new, effective therapy approach, from which we expect fewer side-effects,” said Professor Reinhold Schmidt from the Hannover Medical School.

Schmidt and his colleagues tested VIR-576 on 18 HIV-infected patients, in the first clinical study of the peptide. Their results were published the latest issue of the journal Science Translational Medicine.

The principle they have discovers also offers hope in the battles against viruses such as measles, hepatitis and Ebola.

A virus works by docking with a cell, hijacking its internal machinery and using it to make copies of itself. Usually, though not always, this makes the host sick, as is the case with HIV, which causes AIDS.

Medications already exist that block the attachment of HIV to human cells but these work either on or inside the cell.

“Because our peptide works directly on the virus rather than on the cell, certain side effects do not occur,” Schmidt said.

Furthermore, the emergence of viral resistance was less likely than with existing medications because the peptide binds to a part of the virus that never changes.

Highly effective drugs have existed since the mid-1990s that prevent the HIV virus from multiplying. As a result, people infected with HIV in wealthy countries such as Germany have an almost normal life-expectancy, although serious complications can arise, such as strokes and liver damage.

At present the new therapy must be given by transfusion, making it impractical as a treatment for wide use.

“Our goal is to develop a molecule that can be given as a tablet,” Schmidt said.