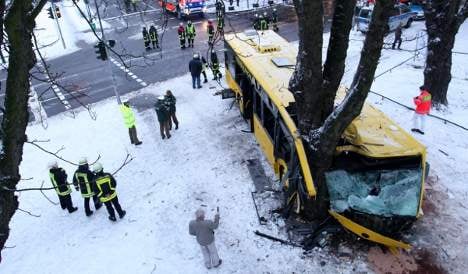 Nineteen children headed to their last day of school before Christmas, as well as six adults, were hurt, police said. Eight children and four adults were taken to hospital with serious injuries.

Witnesses said the 45-year-old driver suddenly slumped forward around 7:30 am. The runaway bus scraped along a row of parked cars and careened through two intersections before running off the road and smashing into a tree.

The bus hit with such force that the tree tore a massive rent down the middle of the bus.

Click here for a photo gallery of the crash.

Fire officers had to cut the severely-injured driver free from the mangled wreckage. He appeared to have suffered an “internal emergency” at the wheel before the crash, police said, though they were unable to give details.

Parents rushed to the accident site. Tents were set up for the parents and to treat the injured at the scene.