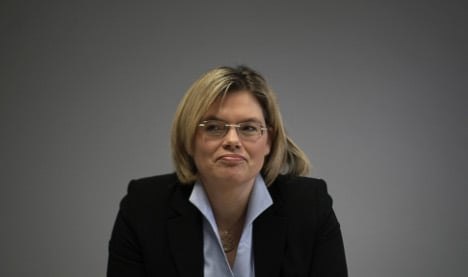 The scandal will make like difficult for the CDU's Julia Klöckner. Photo: DPA

The region CDU chapter admitted Monday to accepting an illegal donation of more than €400,000 in 2006 from the party’s own state parliamentary group.

“The legal consequence of this infraction is a fine that is three times the amount of the illegally obtained contribution,” the Bundestag lower house said in a statement, announcing a decision by its speaker, Norbert Lammert.

The Bundestag said that the move amounted to an illegal donation to the CDU and fined the party €1,203,252.96.

The scandal is expected to become an issue in the campaign for the next state election in Rhineland-Palatinate in March amid an ongoing criminal investigation.

“I’m angry and disappointed,” said Julia Klöckner, the CDU’s lead candidate for the upcoming state poll. “The old obligations will be rectified. The CDU will take care of its payment obligations without hesitation.”

A sprawling slush-fund affair rocked the CDU in the 1990s and tarnished the legacy of then chancellor Helmut Kohl. At the height of the scandal in 1999, Merkel publicly called for Kohl to come clean on the origin of the funds and for the party to break with its murky past.

She became the party’s leader the next year.