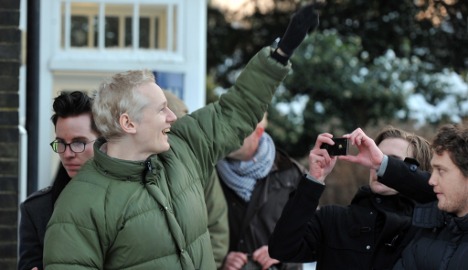 The Wau Holland Foundation, a group associated with the hacker group the Computer Chaos Club, remains one of the main conduits for Wikileaks donations.

Chairman Winfried Motzkus explains that donations are still flowing, though they are not being used for Wikileaks founder Julian Assange’s personal legal battle against allegations of sexual assault in Sweden.

What does Julian Assange live on these days?

Now, as one of the four permanent Wikileaks employees, he gets a salary. That is based on the size of the Greenpeace-remuneration for people in executive roles, so for example a campaigner.

(The remuneration for campaigners at environmental organisations such as Greenpeace ranges from about €3,800 to more than €5,000 per month, according to news agency DPA.)

There are rumours about luxury flights and expensive hotels for Assange.

For us, such bills haven’t turned up. Only completely normal flights have been billed here, mostly even without accommodation costs, because people are put up privately.

Has the foundation contributed to the bail and taken on legal costs (for Assange?)

No. That is primarily not an issue for Wikileaks but rather, at least theoretically, his private matter. That has nothing to do with the foundation.

We won’t accept any bills that have anything to do with this legal process. The process may be related to Wikileaks. But we can’t simply redirect donations that are earmarked for a specific purpose.

Are the donations still flowing?

Direct bank transfers for Wikileaks are still coming to us. We were only affected by the Paypal ban. Payments via Mastercard and Visa were not made through our foundation.

Donations from foreign countries are perhaps somewhat more difficult because of that, and have become somewhat more expensive. But they’re continuing.

How much has been donated to Wikileaks by now?

More donations always roll in when Wikileaks is heavily covered in the media. Now perhaps it’s a little less again. Since October 2009 more than €900,000 has been amassed, of which more than €370,000 has been disbursed.

In January or February we plan to publish a complete financial audit of Wikileaks donations.

Is the foundation overloaded by the Wikileaks campaigns?

At first we were completely overrun. It is our biggest project by far. We are employed and all work on a voluntary basis for the foundation. We are also spread out geographically. So it isn’t a simple matter.