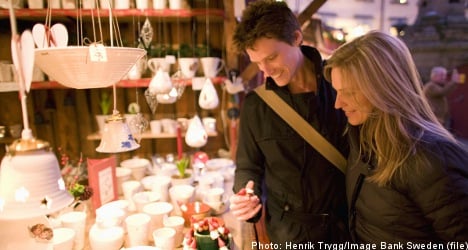 However, booksellers have reported improved sales, both at retail outlets and online, perhaps because books complement inhospitable weather conditions.

It is difficult to determine whether retail on the whole has had a weaker holiday season or if it is just these particular sectors that are experiencing difficulty, said Jonas Arnberg of the Swedish Retail Institute (Handelns utredningsinstitut, HUI).

“I do not think there is reason to believe that there should be a particularly bad Christmas season, but one worries a little about these numbers,” he said.

For shoe stores, HUI did not not expect an increase when they made their Christmas sales forecast.

“It would be a miracle if shoe retailers did not fall into the red in December, partly because there was sales growth of nearly 50 percent in November in the shoe industry, so there are hardly any shoes left to sell. In addition, sales in December last year went very well. The comparisons are against a tough month,” said Arnberg.

HUI expected an increase in sales at clothing stores. However, for the clothing industry, a large volume of its sales take place in the days between Christmas and January 6th, when there are widespread sales across the country.

Consequently, there is still optimism that sales figures will near break even compared with last year, said Arnberg.

“However, it confirms that so far, it has not been full speed ahead with Christmas sales. It is important that they get good results this last week to achieve a new Christmas record,” he said.

On the other hand, at bookseller Akademibokhandeln, there is no sign that neither the cold nor the bomb attack in Stockholm has scared away customers. Christmas shopping at the chain’s stores has increased by about 5 percent compared with last year, according to press contact Louise Strandberg.

“People have risked going out despite the cold and bomb threats in Stockholm. They buy books anyway. We feel hopeful based on the daily reports we get from the stores,” said Strandberg.

At the same time, online bookstores continues to increase sales, although the increase appears to have slowed from rapid growth in recent years, according to Strandberg.

“Online shopping cuts away at retail outlet sales, even this year. It has grown quite rapidly in the past, but this year, the increase seems to have slowed down,” she said.