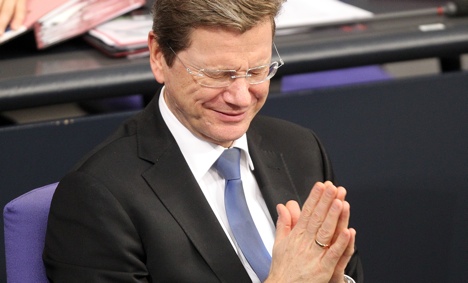 According to an Emnid poll published in news magazine Focus on Sunday, the FDP would reach only four percent in both Baden-Württemberg and Rhineland-Palatinate, missing out on the five percent necessary to be represented in their parliaments. Both states are holding elections on March 27, 2011.

In Baden-Württemberg, where the campaign could be affected by this year’s furore over the Stuttgart 21 rail project, the Christian Democratic Union (CDU) leads with 41 percent, with the Green party in second place on 29 percent. The centre-left Social Democratic Party (SPD), the main opposition on a national level, is way back on 19 percent.

In Rhineland-Palatinate, the poll says the SPD is leading on 39 percent, with the CDU close behind on 37 percent and the Greens a distant third on 11 percent.

The FDP’s terrible ratings are likely to increase pressure on party leader and foreign minister Guido Westerwelle, whose rank-and-file have been turning on him in increasing numbers in recent weeks.

Some regional FDP leaders have been calling for his resignation, with Wolfgang Kubicki of the Schleswig-Holstein FDP last week comparing the party’s current leadership with the last days of East Germany. Party membership numbers are dwindling, with many FDP supporters disappointed with the FDP’s failure to set its own agenda in government.

But the FDP’s national leaders have rallied around Westerwelle, and it was announced that he would be making campaign appearances in Rhineland-Palatinate.

Westerwelle is also expected to appear for the campaign in Saxony-Anhalt, which goes to the polls on March 20. FDP’s main candidate there Veit Wolpert told the magazine, “We’ve got Westerwelle in the campaign and we’re not going to throw him out.” But he added, “We were elected for tax reform, and have not delivered it. That annoys me too.”