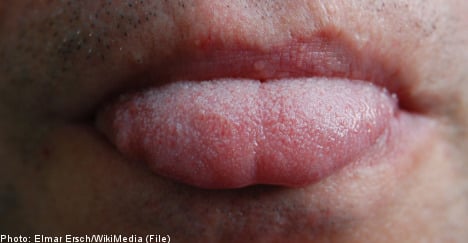 The young woman was asleep beside her boyfriend at the time of the stranger’s unexpected visit, the local Hudiksvalls Tidning reports.

Upon discovering the strange man’s tongue pressed against the inside of her elbow, the woman first woke up her boyfriend to ask if he knew who the stranger was.

The couple’s initial attempts to force the unknown intruder out of the house were met with angry rebuttals from the man, who demanded to know who the couple was and what they were doing there.

The arm-tasting bandit has now been charged with sexual molestation, breaking and entering, as well as drug crimes, the newspaper reports.

In defending his actions, the 22-year-old man told police he was drunk at the time and has no recollection of entering the couple’s home or licking the woman’s arm.

The incident, which took place two months ago, is reminiscent of a similar incident from October involving a drunken student from Skåne in southern Sweden.

Following a party with his university classmates, the student broke into a home he thought was his own, but in fact belonged to a family who were startled by the strangers’ abrupt entrance.

The mother at first thought the drunken student was her son, but upon realising she instead had an intruder in her home, she called police and waited outside with her family in the pouring rain until five squad cars arrived in response to the call.

The student was given a suspended sentence, fined, and ordered to pay to replace the window he broke to enter the house.