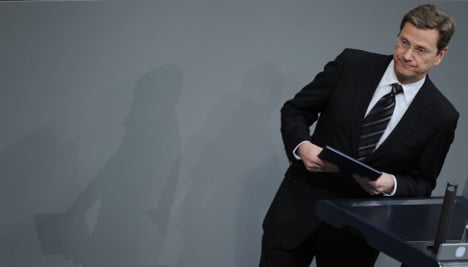 The German media reported on Thursday that the so-called “Schaumburg Circle” – made up of influential Free Democrats including Economy Minister Rainer Brüderle – this week openly discussed replacing Westerwelle as FDP chairman in early January in the hope of avoiding disaster in several state elections in 2011.

But unlike previous calls by prominent regional FDP politicians for him to hand over only the reins to the party, the group apparently also brought up the possibility of Westerwelle also resigning as foreign minister.

“The people expect us to work for the agenda for which we were elected,” said Brüderle on Thursday, who is considered as a possible successor as FDP chairman. “We won as a team and we will overcome this difficult situation as a team.”

The FDP’s persistently dire opinion poll ratings and the public’s generally negative image of Westerwelle have bolstered his inner-party critics, who are demanding he step aside to enable a fresh start.

His position was weakened further by recent revelations his chief of staff had fed information to US embassy officials during the FDP’s coalition negotiations with Chancellor Angela Merkel’s Christian Democrats last year.

On Wednesday, leading FDP members from the state of Baden-Württemberg published an open letter to Westerwelle asking him to put the party first by giving up his post as chairman. Herbert Martin, the FDP’s parliamentary leader in the state of Rhineland-Palatinate, called Westerwelle “dead weight” dragging down the party.

And in an interview published earlier this week, Wolfgang Kubicki, head of the Free Democrats’ parliamentary group in the northern state of Schleswig-Holstein, said the party could collapse under its leaders’ noses.

“The situation in which we find ourselves reminds me of the disastrous late stages of the GDR (East Germany),” he told news magazine Der Spiegel. “All of a sudden they were no longer there. The leadership could not grasp that, right up to the end. I can happen that the FDP implodes too.”