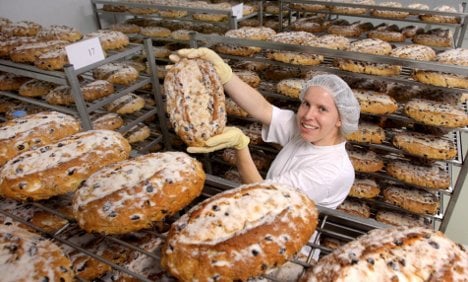 The art of baking Lebkuchen began in monasteries during the Middle Ages, when the word leb meant “remedy.” The medicinal herbs and spices grown in monastery gardens – including cinnamon, ginger, nutmeg, cloves, aniseed and cardamom – were baked into the honey cookies as a symbol of the healing brought to the world by Christ’s birth.

Now supermarkets sell ready-made spice packets for the yeast-free cookies, which often use thin white wafers as a base. The ingredients of different regional versions sold at stores and Christmas markets are now state regulated to preserve the their tradition.

Click here for The Local’s visual guide to Christmas markets.

The shortbread cookies called Spekulatius are most closely connected with December 5, when Germans celebrate St. Nikolaus. The name is thought to be related to the Latin word for bishop, “speculator.”

The spiced cookies, which contain cloves, cinnamon and cardamom, are traditionally stamped with a variety of images of St. Nikolaus as a bishop.

Christstollen or just Stollen, as the loaves of sweet raisin bread are known, was first recorded in 1330 at a Naumberg monastery. Said to resemble the swaddled baby Jesus, the original loaves contained ingredients acceptable for Advent fasting – just water, oat flour, yeast and oil.

But after Pope Innocence VIII himself granted permission for butter to be used in the dough in 1491, Stollen developed into a special Christmas sweet and are said to taste best after a few months in the pantry. The basic form now contains raisins and sometimes also candied citrus peels. But variations include almonds, marzipan and even carrots now abound.

Some 150 years after the existence of Stollen was recorded in Naumberg, a similar Christmas bread called Striezel was noted in Dresden. The city and surrounding region are most famous for the bread, and the Saxon capital’s main Christmas market, the Striezelmarkt, was named in its honour, though the bread is now also known as Stollen there.