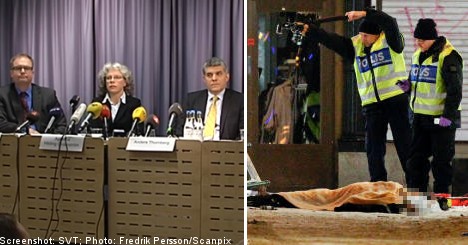 “We’re trying to create a 100 percent picture of what happened. One thesis we’re working on is that he had some sort of problem with the equipment and therefore headed toward Bryggargatan,” Anders Thornberg of the Swedish security service Säpo told reporters on Wednesday.

Thornberg stressed that this was just a theory, pointing out that the investigation is still in its initial stage.

“We are not ruling anything out and we are holding all doors open … We don’t want to get locked into any specific lead,” he said.

The bomber, strongly believed to be Taimour Abdulwahab, blew himself up on the much less crowded street, just metres from its intersection with Drottninggatan, a bustling pedestrian street lined with shops and eateries.

“Our current picture of the final movements of the bomber was that he had trouble exploding the device and was therefore moving back and forth close to the street where he was found,” Jan Garton, a security chief with intelligence agency Säpo, told AFP.

Investigators have so far refused officially to confirm the identity of Saturday’s bomber, since DNA results from Wednesday’s autopsy have yet to be released, but have not denied other reports that it was Abdulwahab.

Thornberg said formal identification should be clear “within days.”

Investigators also revealed that, aided by explosives experts from the US Federal Bureau of Investigation (FBI), they have identified the type of explosive used in the blasts.

“Tips are coming in, a lot of people want to provide information and our analysts are working on it. We’ve secured material from two locations. It will take a little time because the explosive material must be analysed,” she said.

“At the moment, we think we know what sort of explosive was used.”

Hilding Qvarnström, who is heading up the preliminary investigation into the suicide bombing, said than an autopsy had been carried out on the body of the bomber.

However, she refused to divulge any of the findings from the autopsy.

Police have yet to determine if the bomber had any helpers, and police and prosecutors refused Thursday to reveal details of the investigation.

“One important priority of the investigation is to know whether he was alone or wether he had accomplices. That’s all I can say for now,” was all Garton would say.

“We expect the work to continue for a long time. We have a large number of resources at our disposal. We’re working with expert authorities in Sweden in an effort to get a comprehensive picture of the bomb,” Anders Thornberg of Swedish security agency Säpo told reporters.

“We’ve examined the bomb site and the car and had made a number of interesting discoveries. I can’t go into what they are.”

Thornberg explained that tests revealed the bombs didn’t contain any radioactive material, but that analysis of the material continued. He added that the sound file attached to an email sent by the bomber minutes before the bombing is being analyzed, as is footage from surveillance cameras.

According to Thornberg, Swedish police and their partners are “doing everything we can to make it safe to spend time in Sweden.”

Jan Garton of Säpo reiterated to reporters in Stockholm Thursday that the current terrorism threat level, which was raised in October to “elevated” would not be raised further for the time being.

“At this point in time we have no reason to adjust our terror threat to Sweden or to Swedish interests,” he said.

A group of around 500 Shia Muslims meanwhile marched throw a Stockholm snow storm Thursday afternoon to comdemn the attack, carrying signs stating “No place for terrorists” and “Peace, Peace, Peace.”