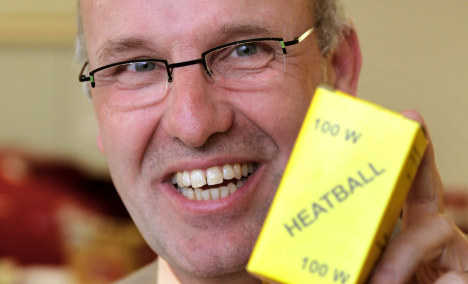 In what was meant to be a humorous protest of the European Union’s phaseout of conventional bulbs, DTG Trading owner Siegfried Rotthäuser ordered 40,000 in November from China. He intended to skirt regulations by selling the 75- and 100-watt strength bulbs as a source of heat for what his website calls a “resistance art project.”

“Heatballs are opposition to regulations being passed that bluntly ignore the most basic democratic principles and bypassing parliamentary procedures, effectively muzzling the common man,” the site reads, adding that it is also a protest of “unreasonable measures supposedly protecting our natural environment.”

Turning the conventional understanding of light bulbs on its head, in Rotthäuser’s estimation, Heatballs have a 95 percent efficiency as a heating device, since only five percent of the energy they use are converted to light.

But officials in Cologne disagreed. A report on the matter by the Association for Electrical, Electronic & Information Technologies (VDE), Heatballs fall under EU light bulb regulations and cannot be imported, a spokesperson said.

The delivery will remain held by Cologne-Bonn airport customs officials, he said.

In September 2009, the EU began phasing out incandescent light bulbs in a bid to save energy and protect the environment. Consumers have been urged to replace the old bulbs with new energy-saving versions such as compact fluorescent and LED lights. The complete phase-out of old light bulbs is to occur by 2012.