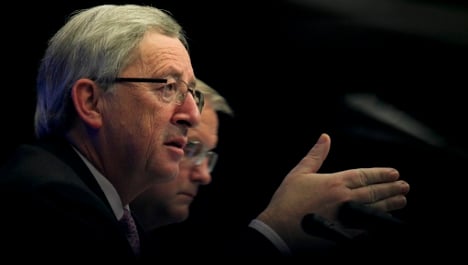 Juncker told German weekly Die Zeit in an interview that Berlin had not even properly looked at his proposal, which was aimed at helping weaker eurozone members raise money, before deciding to oppose it.

“Germany’s thinking was a bit simplistic on this,” he said. “They are rejecting an idea before studying it. This is very strange. This way of creating taboo areas in Europe and not dealing with others’ ideas is a very un-European way of dealing with European matters,” he said.

Merkel responded by urging for “calm” ahead of next Friday’s summit of EU leaders, where discussions will focus on creating a permanent crisis mechanism for the eurozone and what the chancellor called “narrow” changes to EU treaties.

“I think that we should work in a calm and goal-oriented manner towards what awaits us next Friday. This calm manner is my contribution to making sure we are successful next Friday,” Merkel told reporters.

“It is exactly this talking against other people and about other people which should stop, because the markets definitely see this finger-pointing as a sign of discord.”

Such collective “E-bonds” could help eurozone members seen by investors as having shaky public finances lower their borrowing costs, since the bonds would be backed by other countries and therefore seen as less risky.

Sky-high interest rates for Irish and Greek bonds contributed to both countries having to go cap-in-hand to the European Union and the International Monetary Fund this year for bailouts worth tens of billions of euros.

Painful yields or interest rates on bonds sold by other members of the 16-nation currency union, including Portugal and Spain, have raised fears that they too will need help.

But at a meeting of eurozone finance ministers this week, Germany was adamant that it thought Juncker’s idea, which won backing from Italian Finance

Minister Giulio Tremonti, was not the way forward.

And ahead of a crunch EU summit next week, Germany has also put its foot down over increasing the size of the €750 billion bailout fund operated by the EU and the IMF, despite fears it would be too puny if Spain threw in the towel.

German Chancellor Angela Merkel has said joint eurozone bonds would weaken states’ rigour in bringing their finances in order, something she sees as key to preventing another crisis. Spain and the Netherlands are also opposed.

“Interest rate competition is a way of getting (eurozone members) to stick to stability criteria,” Merkel said earlier this week.

Germany, whose finances are seen as so solid that it currently enjoys among the lowest borrowing costs in Europe, fears that joint eurozone bonds could push its bond yields higher.

Berlin also worries that issuing such bonds would be blocked by Germany’s highest court for being in breach of the “no-bailout clause” of the European Union’s governing treaties.

German Finance Minister Wolfgang Schäuble has said the bonds were impossible “without fundamental changes” to these agreements.