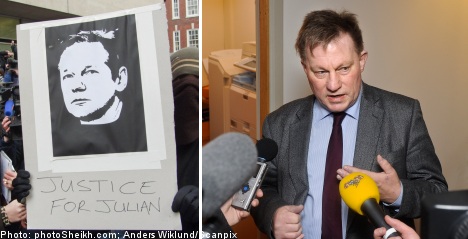 “There is absolutely no link between what those two women have been through and WikiLeaks, the CIA, or the American administration,” Claes Borgström said.

The case “has nothing to do with WikiLeaks. I would like Julian Assange to come forward and say that himself. It would be a way of getting rid of all these rumours,” Borgström told reporters in Stockholm.

Borgström criticised the 39-year-old Australian for “not only hinting, but saying that this case is a conspiracy.”

“He knows this had nothing to do with WikiLeaks,” the lawyer stressed.

Assange, whose website is currently publishing thousands of confidential US diplomatic cables, was denied bail and remanded in custody in Britain Tuesday following his arrest under a warrant issued by Swedish authorities.

The British court, which denied him bail, heard Assange is accused of unlawfully coercing and sexually molesting a woman on August 14th and deliberately molesting her on August 18th.

A fourth allegation claims Assange had sex with a second woman on August 17th while she was asleep at her Stockholm home and without using a condom.

During an interrogation with police in Stockholm in late August, the transcript of which was reviewed by the Expressen newspaper, Assange admitted to police that one of the women behind the rape allegations had rejected his overtures to have sex.

“Yes, sometimes, but not in a way which was meaningful. No, not something which would be out of the ordinary,” Assange told police when asked if the woman had rejected his sexual advances.

At the start of the interrogation, Assange was informed that he was suspected for molesting a woman in her apartment by having unprotected sex with her.

According to Expressen’s sources, the woman accused the WikiLeaks founder of consciously puncturing a condom and then having sex with her, something Assange flatly denied in the interrogation.

Assange was reluctant to leave his version of events, fearing it would be leaked to the press, but was eventually convinced by his attorney at the time, Leif Silbersky, to provide details to the police.

He admitted that he had sex “several times” with the woman during the night between August 13th and 14th, but claimed he used a condom.

However, some details of the interrogation remain confidential, but according to Expressen, the questions posed by police suggest that the woman saw something that made her believe that Assange may have nevertheless had unprotected sex with her.

Assange admitted that the woman had asked him about the incident.

“And we didn’t discuss it further at all, not at all,” Assange said.

Assange has nevertheless consistently denied the rape allegations, which his London-based lawyer Mark Stephens told journalists Tuesday were “politically motivated.” He has also said the claims were part of a “smear campaign” to discredit his website.

Borgström said the elusive WikiLeaks publisher’s arrest was “a positive development” for his clients.

“They are a little relieved that he is under arrest in England, but at the same time, it’s a very frustrating situation, they have to wait much longer,” he said.

The lawyer described his clients as “two ordinary, young Swedish women” who were interested in WikiLeaks’ work and for that reason went to listen to Assange speak in Stockholm in August.

“They are very credible, they have given very detailed stories about what they have been through,” Borgström said.

“This is like any other investigation. There is no difference because it’s Assange. It’s up to the prosecutor to decide which information would be released to the accused,” he said.

The two women, he said, got in touch with each other after their contacts with Assange, and decided together to go to the police.

“They informed the police of what had happened, asked for advice,” he said, adding that at the time the two women were afraid they could have contacted HIV.

“That is what the charges look like today. They can change as the investigation goes on,” he said.

“He says he is motivated by exposing the truth,” the women’s lawyer said of

“I think he should bring forth those principles in this case,” he added.

I have no personal fondness for Julian Assange. I cannot forgive him for not condemning the torrent of abuse and slander suffered by the two Swedish women who, in 2010, accused him of sexual assault. His treatment of them has been shameful. Assange has continued to protest his innocence and has not expressed any regret for what happened.

But that was then and this is now. At stake is something much bigger than the fate of one man and two women. And the Swedish government bears a clear share of responsibility for the outcome.

Sweden’s prosecutors dropped the sexual assault investigation against Assange in 2017. For more than three years, he has been held in a maximum security prison in London while he has fought extradition to the United States on espionage charges. In April, a British court finally approved the extradition and referred the matter to the Home Secretary, Priti Patel.

Extradition would be a colossal blow against media freedom. Journalists would fear to investigate US military and surveillance operations around the world. Assange himself faces a lifetime in jail for publishing classified documents about the wars in Iraq and Afghanistan, including evidence of war crimes.

Many Swedish free speech organisations recognise this. “The information obtained thanks to Julian Assange and Wikileaks is of great public interest. In a democracy, whistleblowers must be protected, not taken to court to become pawns in a political game,” says the Swedish Journalists’ Association. A large number of press freedom and human right organisations have echoed these words, including Amnesty International, Human Rights Watch and Index on Censorship, to name but a few.

“Should Assange be extradited to the US, it could have serious consequences for investigative journalism,” says the Swedish branch of Reporters without Borders. “Through the indictment of Assange, the US is also sending a signal to all journalists who want to examine the actions of the US military and security services abroad, or US arms deals for that matter. This also applies to Swedish journalists.”

Last month, the Council of Europe’s Commissioner for Human Rights, Dunja Mijatović, called on Patel not to extradite Assange, saying it would have “a chilling effect on media freedom”.  Anna Ardin, one of the women who brought the original accusations of sexual assault, describes the accusations against Assange for espionage as “helt galet” (completely crazy).

Given Sweden’s involvement in the Assange case, the continued silence from Rosenbad, the seat of government offices in Stockholm, is indefensible.

For the seven years in which Assange took refuge in the Ecuadorean embassy in London, he said consistently and repeatedly that he was prepared to face justice in Sweden, but feared extradition to the United States and therefore required a guarantee that this would not happen. His treatment in the UK is proof that his fears were justified.

As early as September 2012, The Local quoted Amnesty International on this matter: “If the Swedish authorities are able to confirm publicly that Assange will not eventually find himself on a plane to the USA if he submits himself to the authority of the Swedish courts then this will … it will break the current impasse and second it will mean the women who have levelled accusations of sexual assault are not denied justice.”

And yet, throughout, Sweden’s Ministry of Justice kept quiet. Instead, the Swedish Prosecution Authority stated repeatedly: “Every extradition case is to be judged on its own individual merits. For that reason the Swedish government cannot provide a guarantee in advance that Julian Assange would not be subject to further extradition to the USA.”

In 2016, a United Nations panel decided that Sweden had violated the Universal Declaration of Human Rights and the International Covenant on Civil and Political Rights. It called on the Swedish authorities to end Assange’s “deprivation of liberty”, respect his freedom of movement and offer him compensation. Again, the government itself remained silent, although Sweden’s director-general for legal affairs said that it disagreed with the panel.

Freedom of speech is one of the four “fundamental laws” that make up the Swedish constitution. There can be no excuse now for Morgan Johansson, Justice Minister, not to speak out in defence of Assange’s role as a whistleblower and journalist.

Imagine if Assange had revealed Russian war crimes in Ukraine and was being held in Moscow’s high security prison? Every Western leader would be up in arms.

Assange’s wife Stella Moris has Swedish citizenship. Her life, and that of their two children, will be destroyed if her husband, their father, is sent to rot in a US jail.

At this point in time, when Sweden’s independence in global affairs is in doubt owing to pressure from Turkey over its application to join Nato, it is even more vital for the government to break its silence and help bring the persecution of Julian Assange to an end.

David Crouch covered Julian Assange’s campaign in the Swedish courts for The Guardian newspaper and is among 1900 journalists to have signed a statement in his defence. He is a freelance journalist and a lecturer in journalism at Gothenburg University.