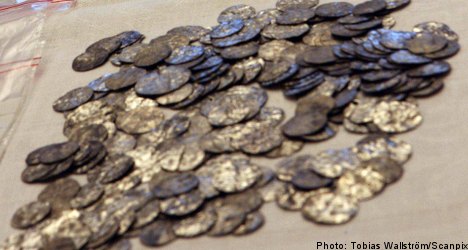 The thieves were caught by chance and will now be prosecuted for the theft of around 1,000 silver coins from the Viking Age. Five men aged 40 to 45 were charged for robbery.

“These thefts have been so frustrating for many years. It really feels like a sweet success that it has resulted in criminal charges against the thieves today,” said Majvor Östergren, archaeological administrator of Gotland’s county administrative board.

The silver treasure comprised a total of 2,000 coins from the 1060’s, mostly German, English and Danish coins. The thieves had stolen over 1,000 coins.

“This was the typical content of a silver treasure during the Viking Age on Gotland,” said Östergren.

The thieves found their treasure stuck in a field in Gandarve in Alva. Since the traces of ancient pillagers are usually rained or cleared away, it is often very difficult to both detect and solve crimes.

The suspects were linked to the crime scene by a remarkable discovery. Part of a crucifix from the 11th century was found in the ground where the looters dug. Several days later, an email was discovered by chance with a photo of a part of a crucifix.

A comparison of the find and the image showed that the parts belonged together and that the crucifix came from the hiding place in the field in Gandarve.

“The person who had sent the email was suspected of having attempted to sell the crucifix and he led us on to another person with ties to Gotland,” said prosecutor Mats Wihlborg.

During a raid on a property on Gotland, investigators came across three people with metal detectors, shovels and backpacks. After examining computers and GPS equipment, they also found links between the defendants and two other places where the looters had struck on Gotland.

“It is very rare that we get this far. We have never had a case of this scope,” said Wihlborg.

For looters armed with metal detectors, Gotland, with its many ancient finds, is a goldmine. A single rare coin from a silver treasure could be worth six figures alone.

Stolen goods are often sold on Swedish and foreign websites that specialise in these types of objects. Parts of silver treasures are also sold by the finest auction houses in Europe.

Kenneth Mandergrehn, coordinator of the cultural heritage crimes at the National Police (Rikspolisen), described the looting of antiquities as a large and often difficult problem.

“We rely heavily on the public being mindful. The crimes often take place at night out in fields with the help of metal detectors. As a rule, the looters are well acquainted with the areas. They know the value. They are not ordinary people who are out and plundering,” he explained.

He emphasised that the thefts have many negative effects.

“When they rummage around for treasures in the ground, all the information about how the objects were placed and what was found around them is destroyed. We lose the historical background,” he cautioned.