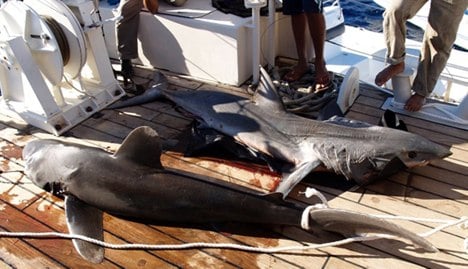 Mohammed Salem, director of South Sinai Conservation, said she died after a shark attacked her in Naama Bay, only one day after Sharm el-Sheikh reopened its beaches following two other attacks in which Russians were mauled.

“There has been a death unfortunately. She was a German lady. We have taken everyone out of the water,” he said.

Medical officials said the woman was pulled out of the water dead after the shark had mauled her thigh and arm.

Conservation experts said on Friday they captured two sharks, an oceanic whitetip and a mako, which they believed had mauled the two Russian swimmers last Tuesday and Wednesday. A Ukrainian suffered bruising on coral. Government workers had dumped chum in the water to bait the two sharks.

The resort’s mayor, Gamal al-Mahdi, told news agency AFP the beaches were reopened after authorities deemed there was no further threat off the coast, which attracts between three and four million tourists a year.

However, an Egyptian NGO warned on Saturday that at least one of the sharks behind the attacks was still at large.

South Sinai governor Mohammed Shosha has said the sharks could have turned frenzied after a ship transporting livestock dumped dead sheep into the sea, while marine experts said overfishing may have forced them closer to shore.

The string of attacks in Sharm el-Sheikh was “unprecedented,” according to an expert on sharks, Samuel Gruber, who heads Miami’s Bimini Biological Field Station.

“Then for it to happen the next day is almost like a ‘Jaws’ scenario,” he said, referring to the 1975 iconic Hollywood movie about a killer great white shark.

Gruber said finding the predator or predators would be extremely difficult.

“It’s really pretty much a crapshoot. Finding the actual shark is like trying to find a needle in a haystack,” he said.

Salem said the first shark to have been captured, the oceanic whitetip, was identified as the same one filmed by divers just minutes before it surfaced to attack the snorkelers.

The mako believed to have attacked the swimmers on Wednesday was also recognised by witnesses, according to the South Sinai Conservation head.

But the Hurghada Environmental Protection and Conservation Association said on Saturday that the captured oceanic whitetip was a different one from the shark caught on tape.

Statistics compiled by the International Shark Attack File reported 61 worldwide attacks in 2009, five of them fatal.