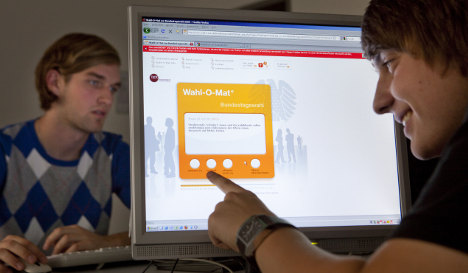 The programme, which is produced and administered by state institutes, has to include small parties in the options available to users, according to a court ruling from two years ago.

But the State Centre for Political Education in Saxony-Anhalt’s state capital Magdeburg has refused to include the neo-Nazi NPD in its version, even though the party is running in the election.

A spokesman said its exclusion was to avoid shocking younger voters who might be upset if the programme suggested their attitudes matched the neo-Nazi party. He said it would be better not to run the programme at all rather than risk a court case.

The extremist parties standing in Baden-Württemberg and Rhineland-Palatinate state elections on March 27, will be included in the local versions of the Wahl-O-Mat.

“If the NPD is licensed to stand for election, sadly it also has to be in the Wahl-O-Mat,” said Peter Malzkorn, spokesman for the Rhineland-Palatinate State Centre for Political Education.

Users of the programme in Baden-Württemberg will have the choice of deselecting specific parties from their options before they answer the dozens of questions which the Wahl-O-Mat poses to determine the best match of political party.

“We do not practice a protectionist education policy. One must deal offensively with the extreme parties,” said Karl-Ulrich Templ, deputy director of the centre for political education there.

Hamburg voters will also have the option of using the Wahl-O-Mat to help them decide ahead of the state election there, which will probably be held on February 20.