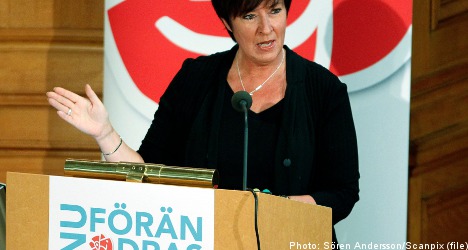 “We were not successful in washing away the image of the Social Democrats as the party for benefits and the Moderates as the party for jobs. We must have a job policy without reservations. Anyone who can should work, it should always be worth it to work,” she said.

Sahlin said she never again wants to knock on doors and meet people who say, “Yes, yes, we will vote for you even though we live in a house, have jobs and earn a good living.”

In addition, she was critical that Social Democrats cooperated with the Left Party for the September election.

“I am not bitter, but very emotional today,” she said on Saturday.

She reiterated that while the Social Democrats won the support of 22 percent of voters with a job, the ruling Moderates won 32 percent of the vote among the employed.

A total of 120 delegates from across the country participated in the party’s advisory committee in Sweden’s parliament, the Riksdag, on Saturday.

“Cooperation with the Green Party or with both the Green and Left Parties signals two completely different paths. The Swedish electorate realised this and so did I,” Sahlin said in reference to Red-Green cooperation.

Sahlin gambled with cooperating with the Greens, but was forced to backtrack and bring the Left Party into the fold as well, she claimed.

“Give my successor a clear mandate. Let him or her lead and rely on the choices he or she makes. This will go well,” Sahlin urged the party.

Social Democratic MP Veronica Palm, who is mentioned in speculation as Sahlin’s successor, defended cooperation with the Left Party.

“I think it was necessary as it appeared and the way the political climate was. We had a right-wing that was well formed,” she said.

Sahlin hopes and believes that the party’s crisis awareness lingers longer this time than after the 2006 elections.

“It can result in a much stronger and more modern social democracy. I wanted to contribute to that today. For sure, I did not say what everyone here wanted to hear, but I am convinced that if I do not say it, few others will say it,” she said.

Miguel Odhner from Gothenburg said it is time to challenge the party’s culture and suggested that the nominating committee choose five to six names, then let members have their say in a referendum. The proposal was defeated.

Party secretary Ibrahim Baylan argued against the proposal on the changes that were brought forward.

“We must have processes that are well organised,” he said.